Kevin Rudd and the boat people 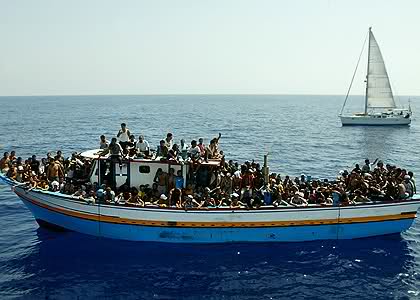 Yesterday there was a major political announcement across the ditch.  Kevin Rudd announced that Australia will no longer consider giving refugee status to people arriving illegally by boat and that Papua New Guinea has agreed to take in any boat person who subsequently establishes that they are eligible for refugee status.  In his words “[a]s of today, asylum seekers who come here by boat without a visa will never be settled in Australia”.

The proposal has been met with a variety of responses.  To show how reactionary and inhumane the policy is Tony Abbott has described it as promising.  The fact that Abbott is favourably inclined to support the policy should have Labor activists bowing their heads in shame.  Only the Australian Greens have the guts to describe it as it is, with Greens leader Christine Milne describing it as ruthless and repugnant and saying that it was absolutely immoral for a rich nation to “dump thousands of vulnerable people into an impoverished country“.  Milne aptly said that Rudd had managed to leap-frog Tony Abbott in terms of cruelty.

I have always struggled with the issue and the way that it has dominated recent Australian election campaigns.  Because it seems wrong that a country of immigrants who continue to mercilessly trash the indigenous people should be so up in arms at the thought of other people from overseas also becoming citizens of the lucky country.

In 2001 for instance the Tampa affair probably helped John Howard hold onto power after he refused to let the Norwegian ship the Tampa enter Australian waters because it held rescued boat people.  Conditions on the ship were worsening with reports of dehydration, malnutrition and  exhaustion but Howard still refused to allow the refugees to be taken off the ship.  Later claims made by Howard during the election campaign that year that other boat people had threatened to throw their children overboard if refused entry to Australia were determined to be untrue but only after Howard had regained power with an increased majority.

A major problem with Rudd’s proposal is that it breaches international law.  Under the United Nations Convention relating to the Status of Refugees a refugee is someone who “owing to a well-founded fear of being persecuted for reasons of race, religion, nationality, membership of a particular social group or political opinion, is outside the country of his nationality and is unable or, owing to such fear, is unwilling to avail himself of the protection of that country”.  If a refugee presents at the boarder of another country then as long as they have acted in good faith they should not be subject to penalties, the primary one which is their return to their country of origin.  And most importantly refugees shall not be expelled or returned to territories where their life or freedom would be threatened on account of their race, religion, nationality, or membership of a particular social or political opinion.

The receiving country is obliged to not return refugees to their homeland unless and until they have been subject to a proper process.  The Australian High Court has recognised that Natural Justice must be observed when making a decision on a refugee status application.

The number of boat people reaching Australia each year is not huge.  Over the past couple of decades the numbers have mostly been under a thousand.  In 2001 there were 6,556 and last year there were over 17,000.  But Australia is a huge place.  And this scale of immigration into a country of 22 million people is figuratively and literally a drop in the bucket.

It is not as if Australia is a culturally homogenous place.  Its diversity is one of its most charming features, apart from its inability to treat and care for the indigenous people properly.

Rudd’s proposal could be considered to be politically astute in that it takes away from Abbott the ability to make boat people an election issue.  But it is inhumane, degrading and illegal.  Shame on him.

165 comments on “Kevin Rudd and the boat people ”