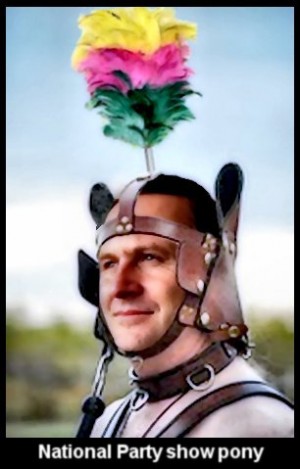 The problem with a presidential campaign strategy is that when you put all your bets on one pony, there’s not a lot of room for error. If that pony goes lame, or if it’s a one trick pony and the trick stops working, you’re in the crap.

John Key has a history of choking under pressure, but this time, calling on the police to raid the premises of our national broadcasters TVNZ and RNZ, and our major privately owned newspapers – he’s cracked under the pressure of the campaign and the spectre of losing it all. There’ll be no knighthood if Key becomes the first National PM to lose after just one term.

How can it be considered prudent to declare war on the media barely a week out from a general election when you’re in the lead? How can it be considered prudent to one minute say you’re relaxed about the content of a conversation an you have nothing to hide, then the next minute have police raid media offices to sieze all evidence of that conversation?

It seems to me that the PM is going to pieces. Let’s hope he has a nice peaceful weekend to get a bit of much needed rest.