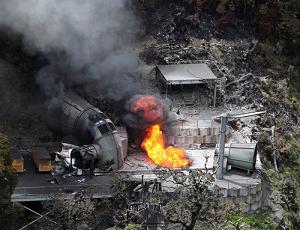 I blogged earlier on this subject and expressed the hope that the Pike River families would receive adequate compensation.  And David Cunliffe elegantly skewered John Key on the issue in Parliament this week.  But regrettably John Key has ruled compensation by the Government out unless it is forced to pay.  And nothing short of legal action will suffice.

The sums involved are at this stage not great.  In the Department of Labour prosecution Judge Farrish ordered Pike River to pay compensation of $110,000 to each of the deceased’s families and also to the two survivors and these sums are very modest.  A comparable case in the United States resulted in a US$46 million compensation package that was part of a US$209 million settlement of criminal and civil liability.  There is still the possibility of a civil case in New Zealand.

The Judge expected the money to be paid.  She previously said that it was morally unjust the way that Pike River Coal Ltd had been able to fold soon after the disaster and thereby avoid paying further money to the families.  According to the Greymouth Star:

Judge Farish slammed the Pike River company for a “total lack of remorse” and claims that it could not afford to pay reparation to the families.
“It is not often a company steps back and holds its hands up and says ‘I have nothing’. Even a company in a fragile state usually comes forward and offers reparation, but here nothing has been forthcoming.
“I am satisfied the company has the means to pay either by existing shareholders or a combination of the shareholders and directors. I note that the directors have significant insurance.”

But the Judge’s very strong statements did not embarrass the relevant parties into coughing up although it has been said that at least one shareholder has had the decency to make a pro rata offer of cash from his share of the insurance payout.

So how did John Key respond to suggestions that the shareholders of the parent company NZ Oil and Gas should stump up with the cash?  After all these included ACC and the Cullen Fund and favourable noises from him would have no doubt persuaded these entities to at least pay their share of the compensation ordered.  Between them they  have a 7% direct or indirect stake in Pike River so on a pro rata basis a miserly $238,000 would have to be paid.  Their share of the insurance payout of $80 million that NZOG received would be $5.6 million so the Government could have paid its share of the compensation from this amount and barely missed it.

But Key ruled this out on the basis that he would be creating a precedent and that the Government would then be responsible for redundancy pay every time the Government held shares in a company.  How he can compare the payment of redundancy with the payment of compensation for avoidable deaths that occurred through gross incompetence is beyond me.  Equating the loss of loved ones because of an inherently unsafe mine with the loss of a job is both stupid and insensitive in the extreme.

So if the Pike River families want justice they will have to take the Government and other parties to Court.  I hope they do.  If they do so they can consider the following as possible avenues for further investigation:

Now that the photo opportunities have passed and the effect of the PR spin that the country was subjected to has subsided it is very clear that an avoidable disaster has occurred and the cost has been innocent workers lives.  The least that should be done is for the Pike River families to be properly compensated.

120 comments on “Key refuses to pay compensation for Pike River ”