It has been a rare and sincere pleasure to see National walk straight into a trap carefully laid by Labour. Goff and his team haven’t even publicly confirmed their capital gains tax policy but proponents to the Left and Right are winning the pre-launch media framing for them, while Key’s contradictory ranting is undermining his credibility. 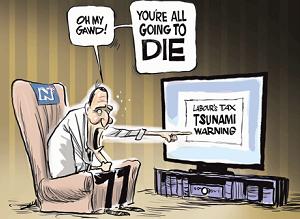 Key’s problem is that he went off half-cocked based on the first dribble of information Labour planted in the media. And then he screwed up his line in claiming that a capital gains tax (which would only apply to a few people and exists in most other developed countries) would be the end of the world while also being completely ineffective. He said it was a tax grab that would send the country ‘screaming backwards’ while also not raising any money and Labour was going to rack up more debt. It didn’t make sense and Key’s tone was shrill.

Key’s criticism that it would take a number of years for capital gains tax to start generating its full revenue stream just showed what a short-term thinker he is and reminded the public that Labour has a record of planning on a decades-long timeframe, while Key can’t seem to plan beyond the end of next week, the next PR fiasco.

As more information has come out, Key’s scaremongering has looked increasingly stupid and been overwhelmed by the voices from the Left and the Right who have come out in favour of the transformative effects of a capital gains tax.

Labour has clearly done their homework – well, you would when taking up a policy that is ‘suicide’ according to received wisdom. They’ve carefully designed their product, got the proponents lined up, and planned the release.

Labour’s tax will capture all capital gain except for the family home, which means it will be a healthier revenue stream than Key was saying and bringing us in line with Australia. In fact, it seems that Labour has balanced its books so its debt line is lower than National’s in the future.

That capital gains will be comprehensive, as it is in Australia, makes it a truly revolutionary policy. Right now, a high percentage of farmers, as with a high percentage of landlords, have a business model that rests solely on someone coming along and paying them more for their capital later than they bought it for originally. That’s not a wealth-producing model, it’s a rentier model. Comprehensive capital gains tax will reduce (albeit only by15%) the logic of this rentier model, which should mean we end up with less international debt to pay for farm and housing mortgages and cheaper, more available credit for business. Right now, we not only borrow too much, we borrow it for the wrong stuff: 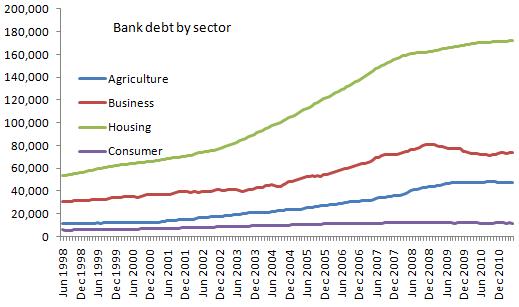 Labour has clearly learned some lessons from National about dealing with the media in the modern age. Pre-launch framing is now essential and they’ve done it well. The big guns are coming out in support, the journos are eagerly reporting each new tit-bit, and the other side has fallen into the trap of over-reacting before all the information is out, which leaves Key looking stupid and irrelevant.

The self-inflicted damage to Brand Key in the past week was probably not planned by Labour, but it is a welcome side-effect of a successful media strategy.