Key’s lies getting our soldiers killed

We have been lied to by our Prime Minister. He told us the SAS was going to Afghanistan to train government soldiers. 10% casualties (2 deaths, 2 injuries from 38 soldiers) in 3 months makes it clear we’re there fighting on the frontline for one side in a civil war. Justifying our losses and that the SAS wants to be there are not reasons to stay. The Jackel takes up the story.
————————————————— 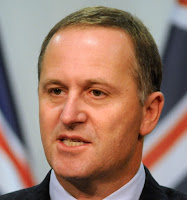 Yesterday it was reported that another SAS soldier has died in Afghanistan. The man is the second New Zealand SAS soldier to be killed in combat, following the death of Corporal Doug Grant last month.

Despite clear evidence to the contrary, New Zealand Lieutenant General, Rhys Jones is continuing the false pretense that the soldier killed was undertaking a mentoring role.

Defence Force chief Lieutenant General Rhys Jones says the SAS was mentoring the Afghan Crisis Response Unit as they acted on information about an attack that was about to happen.

The SAS team, which was supporting the Afghan Crisis Response Unit, was attacked as it tried to cordon off the compound where the insurgents behind the planned attack were believed to be.

So which story is correct? Was the SAS team supporting the Afghan Crisis Response Unit, which means they’re in an armed combat role, or was the SAS soldier killed in a mentoring role, which means he was killed while not in a combat role?

The “mentoring” bullshit is a falsehood that the National government has been promoting for some time now:

As a New Zealand citizen I’m highly pissed off that I was lied to about the role our soldiers are undertaking in Afghanistan.

It’s quite clear that the SAS are involved in armed combat missions and are not simply in a mentoring role. The Prime Minister should not be allowed to get away with such lies! Today he continued to defend his decision to extend New Zealand’s involvement in an unjust war:

“I deeply regret the loss of our soldiers, but I don’t regret the decision that we made to commit the SAS to Afghanistan,” he said.
“They are playing their critical part in trying to free the world from the threat of global terrorism, but obviously it’s a very sad day for New Zealand.”

I wonder if Key only regrets that another soldier has died because it shows the SAS are involved in armed combat, and not just a mentoring role.

Here he is side stepping around a direct question as to why the government was dishonest about the SAS role in Afghanistan:

John Key’s statements show just how badly misinformed he is about the situation, and I’m not the only one to think so:

Guyon – OK, New Zealand has been, in its own small way, involved in this war in Afghanistan for a decade or so itself. When our prime minster talks about why New Zealand is there, John Key says that it’s to stop Afghanistan again being a home for terrorism. What do you say to New Zealand’s prime minister, John Key, in response to that?

Mr Khan – The New Zealand prime minister does not understand Afghanistan. If only he had read the history of Afghanistan, even the British – three wars in Afghanistan. The Russians killed a million Afghans – a million out of a population then of 15 million. A million died, and they were fighting more at the end than the beginning. Everyone was fighting. The women were fighting. They do not understand Afghanistan. This is a quagmire. From day one, I’ve opposed it, this insane war, and I can give you in writing that for another 10 years, there will be fighting there, and they will make no headway at all. In fact, they radicalise the people much more.

Guyon – So your advice to New Zealand in terms of its involvement in Afghanistan?

Mr Khan – That there is no military solution. There’s going to be a political solution. And the longer they keep killing people, and this military, these night raids – remember, most of the people being killed are innocent civilians. They are not fighting an army. They are fighting militants which are being supported by the population. That’s why they’re going to lose the war – because it’s not a question of Taliban; it’s a resistance movement now. And the history tells you, in Afghanistan, whenever an invader comes, they get together and they will resist. They have never accepted outsiders.

12 comments on “Key’s lies getting our soldiers killed ”