The second plank of John Key’s economic plan for New Zealand has fallen through. First, the ‘national cycleway’ became a scattered assortment of cycle paths that were already under construction. Now, the pandas Key was going to rent so we could get rich buying tickets to see them won’t be coming and we have revealing emails to share.

A spokeswoman for Prime Minister John Key said a decision to defer the acquisition of giant pandas was made earlier this year.

“The significant financial implications of a number of disasters, the most recent being the second Christchurch earthquake, meant the Government needed to reprioritise any spending that it could.

“While we are still keen to secure a pair of pandas for a New Zealand zoo, it will have to wait until the economic situation improves.”

Geez, the country sure seems to be on the bones of its arse when it can’t afford to rent a couple of pandas. Of course, no suggestion that perhaps the rich should give back their tax cuts, or ministers should stop using the Air Force as a taxi service.

Now, half a year ago, we were leaked some emails on Key’s panda idea and we’ve been sitting on them waiting to see what happened. Most of them are Wellington City Council staff talking about how Key’s chief of staff Wayne Eagleson is worried that the ‘big story’ of pandas for Wellington zoo, which they code-named(!) ‘Project Doctor’, would leak out.

But one from then-Mayor Kerry Prendergast gives an insight into Key: 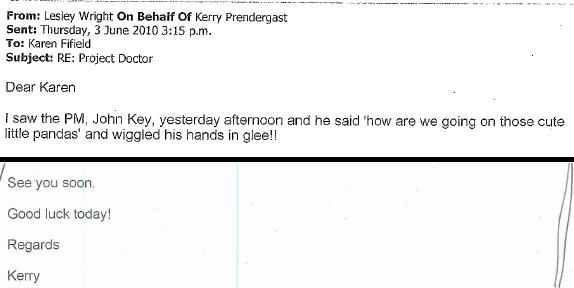 “wiggled his hands in glee” – cringe. 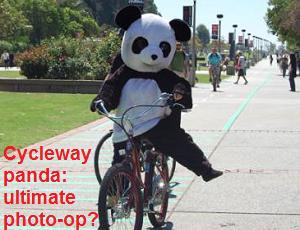 The ludicrous thing was that Key tried to sell these pandas to the public as an economic boon. As if tourists would flock in from overseas to see pandas in Wellington zoo.Or as if selling ourselves zoo tickets makes us richer.

Maybe he should have just been honest with us: all he wanted was a cute photo-op and we were going to pay but it just became indefensible with all the cuts they’re planning.