Key’s ‘sell, sell, sell’ mantra out of touch with NZ

The Crafar Farms decision is sensible and a correct interpretation of the law. Foreign buyers must add something that a local buyer can’t, other than a higher purchase price. Otherwise, our farmers will continue to be out-bid for our land by foreign government-backed companies that can afford a lower rate of return, and NZ will gain nothing. So, why is National rushing to change the law?

As with John Key’s refusal to state a bottom price below which he would not sell our energy companies, National’s determination to sell our farmland come hell or highwater has nothing to do with economic logic and everything to do with neoliberal ideology. The neoliberal bible says overseas investment is good, so they will support foreigners buying any and everything they want in our country.

Of course, on both asset sales and overseas investment, National isn’t just out of step with reality, it is massively out of step with public opinion. A lot of people are looking at Key, who was sold to them as a financial genius, making decisions that a 4 year old could see don’t add up, and wondering if he’s really as smart as they say, and in whose interests he is really working.

By the way, someone book Key into a Laws 101 course. He claimed in Parliament yesterday that the judgment establishes a new legal test. No, it doesn’t. It states what the law has always been since Parliament passed it. That others, such as the OIO, have been using the wrong test doesn’t change that. And, Key repeatedly fobbed off the Judge’s ruling as just an “opinion” – the same way he tried to fob off scientific findings on the dire state of our rivers. Perhaps Key ought to spend a little time studying the separation of powers and why it is that members of the legislature and executive such as himself are not meant to denigrate the decisions of the judiciary, which are not mere ‘opinions’ but statements of the law of the land. 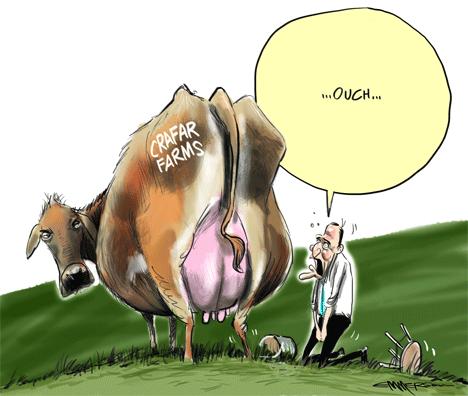