Key’s snub to unions and workers

National promised us an “unrelenting focus on jobs and work”. Instead workers get the finger:

The Government isn’t interested in a union-organised summit to discuss what can be done to help the manufacturing sector save jobs.

The Engineering, Printing and Manufacturing Union (EPMU) blames the Government’s hands-off approach to the economy for a string of redundancies. Business representatives, unionists, economists and political parties will gather in Auckland on Friday. Prime Minister John Key says he hasn’t been invited and wouldn’t go anyway.

Unbelievable. I cannot find the words to express my contempt for John Key and his arrogance. National’s “unrelenting focus on jobs and work” has brought us to an 18 year high in unemployment levels. It would be worse if it wasn’t for the record exodus to Australia (they’re leaving because the pay here is too low and there are no jobs). And Key doesn’t want to talk about jobs with one of the sectors that is most affected?! What a fool.

No, it’s more than foolish. It’s blind arrogance. The unwillingness to admit that anything is wrong. On Planet Key:

“There’s no crisis in manufacturing,” Mr Key told reporters today. “Over the last four years exports have been consistent and the number of jobs has been up a touch from 245,000 to 255,000 – in the last 12 months alone GDP growth in the manufacturing sector was 2.5 percent.”

Compare and contrast with The Greens’ summary on Planet Earth:

(1) Who is right on manufacturing exports?
“Over the last four years exports have been consistent”, vs.
“In the four years to June 2012, exports from manufacturing have fallen by 12.4%, or $1.7 billion”? 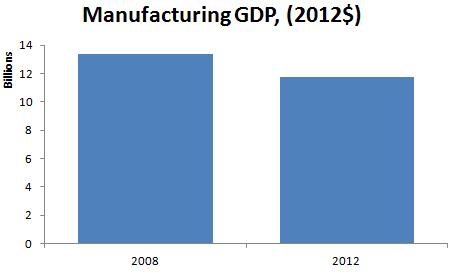 The fall was biggest during the recession, but it is still continuing.

(2) Who is right on manufacturing output?
Exports in the manufacturing sector were 11.7-11.9 per cent of gross domestic product vs.
Output from manufacturing in GDP terms has reduced by 9.1%, or $2.8 billion 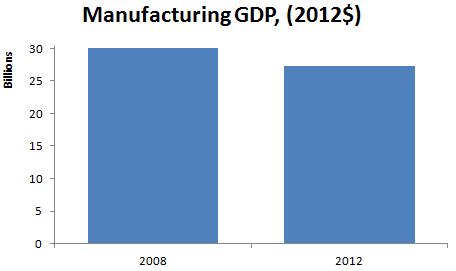 It is now holding more or less even (in constant dollar terms) at a level that is well down on 4 years ago. Using this damaged status quo as an excuse to ignore a jobs summit is worse than pathetic. Where is the “ambition” for New Zealand now?

Here’s the actual data on manufacturing jobs.The Greens have already done me the graph for this one! 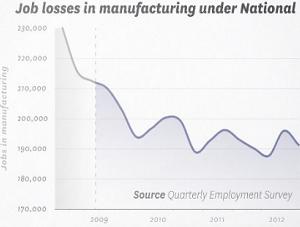 Again, the fall was largest during the recession, but it is still continuing.

So where are the Nats are pulling their numbers from on this? I really have no idea, looks like more made up stats to me.

Summing up. The Nats have comprehensively failed on the economy, failed to create jobs, failed to stem the exodus to Australia. They’re now giving the finger to a jobs summit, and therefore to Kiwi workers. And they’re “justifying” their inaction with dodgy numbers and the acceptance that some kind of damaged status quo is good enough. They are refusing to acknowledge the problems, because to do so would be an admission of their failure. Shame on John Key, and shame on the lot of them.

99 comments on “Key’s snub to unions and workers ”