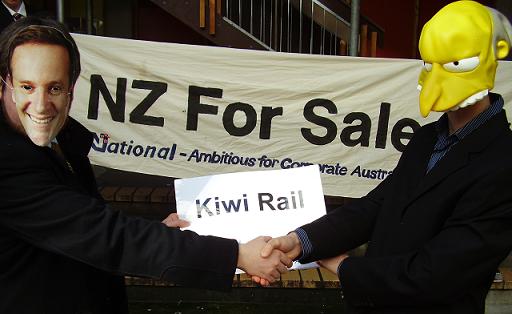 In a speech described by attendees as ‘more bullet points’, John Key announced to the National Party conference today that National would borrow $5 billion more over 6 years to finance infrastructure – specifically roads and the broadband ‘plan’. The money-man has dressed it up cleverly, of course. A fancy new class of ‘investment vehicle’ will be created – infrastructure bonds. Banks etc will buy these off the Government, which will use the money to build roads and then the bond holder will, over the course of several decades, make huge profits from these bonds. It’s a fancy name, but it’s the same thing – we borrow money off someone else and pay them a mint for it later on. Our public debt would increase from 20% to 22% of GDP as a result. Hundreds of millions will flow overseas every year to pay our debts, rather than being used to fund our hospitals and schools.

Key tells us this has nothing to do with tax cuts; that tax cuts would be ‘hermetically sealed’ from borrowing. If you believe that, you’ll believe anything. First, how could decisions on tax cuts be separated from borrowing? They both appear on the Government’s balance sheet – if you cut tax for the wealthy, you’re going to have to borrow more to make up the difference – or would a Finance Minister English not tell himself how much he wants to cut tax when he’s working out how much to borrow? Secondly, if those tax cuts don’t take place, we won’t have to borrow billions of dollars and spend decades paying back foreign banks. It is only because National plans such big tax cuts for upper income earners that it would have to borrow.

And let’s not forget the macro-economics. When New Zealand borrows money, the amount of money circulating in our economy inceases. But our economy is still pretty close to full capacity (unemployment remains below 4%). So, our economy cannot produce enought extra things to be bought with this extra money. Instead, the extra money floating around means that stuff starts to cost more. Borrowing is inflationary and that’s not a good thing, especially right now in New Zealand where the economy is at full tilt and inflation is already heading north of 5%.

Finally, I know I’ve said it before but is this the ambition that Key keeps promising? More roads and more debt – not even an impressive building programme pouring billions into infrastructure, just $500 million a year for more of the same. Where’s the innovative planning, the imagining of a new and better New Zealand? All we’re seeing is ‘we’ll cut your taxes and build some more roads, and we’ll pay for it all by borrowing from the Aussie banks’.

The same old plan, with a bit more debt. No vision of a world-leading low-carbon public transport system, no cutting edge rail network ready for the reality of peak oil. Hell, even the $1.5 billion broadband ‘plan’ remains totally bereft of detail and is coming under criticism from the industry for attempting to do something that isn’t needed in the wrong way, while incidentally restoring Telecom’s monopoly.

National is sorely lacking in a vision for New Zealand, and belief in New Zealand’s ability to be world-leading. They seem more concerned with helping the bottom lines of foreign investors.