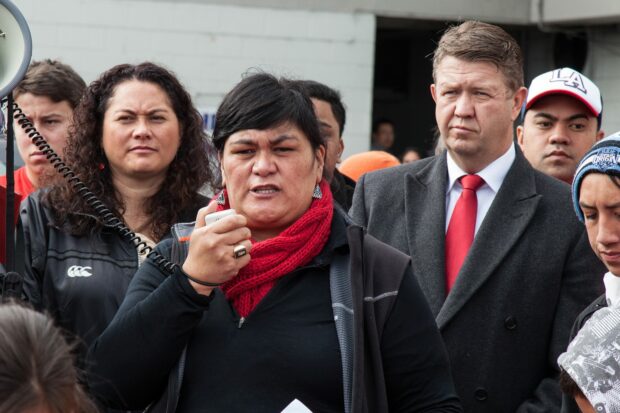 Earlier this week Louisa Wall announced that she is retiring as a Member of Parliament.

It is a real shame.  My dealings with her over the years have always been positive.

She has always been a principled member of the left wing of Labour’s caucus.  During the great civil wars of 2011 to 2014 she was firmly in the Cunliffe camp against the might of ABC.  Some of us have long memories.

The handling of her electorate proved to be complex.  Manurewa should be like Mangere, absolutely rock solid Labour at all levels of democratic representation.  Aupito William Sio is in my view an absolute icon of a leader and representative and under his reign Mangere is an impregnable left wing bastion.

Manurewa has been more difficult.  The effect of George Hawkins, one of the great Rogernomes, continues and his anointed son, Daniel Newman, has not only turned to the dark side but also has huge influence over local government in Manurewa.  I quite like Newman at a personal level.  But his influence suggests that Manurewa could be organised better.

I don’t blame Louisa for this.  It is a problem that needs a much deeper response.  But it did not help her.

Nor did the selection process that saw her eventually stand down.  There is a tension between local preferences and head office goals that occasionally sparks controversy.

As a Parliamentarian she was outstanding.  Over the history of our Parliament I am really confident that no other Parliamentarian has pushed through private member’s bills that have had such profoundly significant effect.

Let us list the two significant bills she introduced and has managed through the process into law:

These are really important laws whose effect will be felt for decades,  I can remember attending a same sex marriage shortly after the bill was passed and the joy and gratitude that everyone, particularly the lucky couple felt, made it a really happy event.

Her presentation was that principled and her argument that compelling that it resulted in one of the best speeches from a Tory MP ever.

In writing this post I had a look at Louisa’s speeches at the third reading stage of the same sex marriage bill.  They were goosebump raising good.  And the logic and justice were so clear.

This third reading is our road towards healing and including all citizens in our State institution of marriage, regardless of their sex, sexual orientation, or gender identity. Although our focus has been on Aotearoa, it is important to remember we are one country that is part of a global community discussing marriage equality. Twelve countries have already been through this process. The US President has declared his support unequivocally. The Queen has recently signed a Commonwealth charter that explicitly opposes all forms of discrimination, which she describes as emphasising inclusiveness. The UK, led by its Prime Minister, has introduced legislation.

But marriage equality is only one issue. There is still a lot of work to be done to address discrimination against our lesbian, gay, bisexual, transgender, and intersex—or LGBTI—communities. Closer to home, many of our Pacific neighbours still criminalise homosexuality; so too do the countries of our new migrant communities. We need to understand these heritage identities and how they contribute to this debate. As the indigenous people of Aotearoa, we can acknowledge that takatāpui have always been part of our history and culture, and that is the case for many indigenous people around the world. Fa‘fafine, ‘akava‘ine, fakaleiti, and mahu vahine are words that go back in time to identify our lesbian, gay, bisexual, transgender, and intersex communities. They are part of our Pacific heritage and need to be acknowledged.

The purpose and intent of this bill is very clear. It means that the law and the social and civil institutions that that law governs apply equally to everyone. It means that a couple who so choose can apply for, and receive, a marriage licence from the State. What it does not do is affect a person’s own beliefs about marriage. The fact that a couple wants to make a commitment to each other by marriage is a cause for celebration, and it can only benefit our society and families as a whole. Marginalising and discriminating against particular sectors does not benefit society and families. It is a simple choice. Do we support discriminatory laws, or not? I know I do not, and, hopefully, that is true of most of the members of this House.

History tells us that the struggles of the gay community, as with any minority, have often been cruel. What has been heartening in this discussion has been the positive response from younger people across the board. It is a generational issue, but it is also an issue about personal experience, and the fact that when you have a friend or a whānau member who is gay, you do not want them to suffer or have fewer rights than you. That is not fair or just.

Kia kaha Louisa.  May the next stage of your life bring you happiness and may we continue to celebrate what you have achieved.