Garner has revealed that 63% of Maori Labour voters don’t know who the leader is. King responds by asking if they know who the PM is. 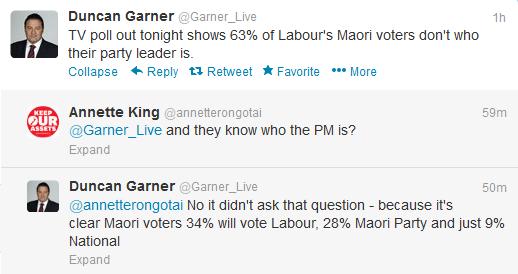 Now, I’m no MP with 25 years’ experience but I reckon  it’s pretty obvious that trying to deflect from a poll showing lack of profile of your leader in a key demographic by implying that Maori are just ignorant isn’t smart.

Especially when already only one in three Maori are planning to vote Labour (one in three!). That suggests Labour has lost favour in a crucial demographic.

Come on, old guard.You won. You’ve kept your talons on Labour. Now, you’ve at least get your act together and make a decent show of it.