Kiwibank is being privatised by stealth 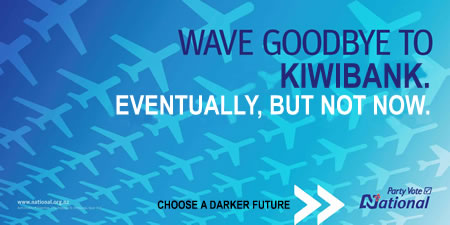 With everything else that is happening this week the partial privatisation by stealth of Kiwibank has escaped scrutiny.

Two days ago the Government announced that the NZ Super Fund and the ACC had taken a share in Kiwibank. The NZSF will own 25% and the ACC will own 22%.

Through financial sleigh of hand the Government will receive a $200 million “dividend” that it can then use for other purposes. Basically money paid to the NZSF for retirement and to ACC for future payment of accident compensation is being invested in Kiwibank. These organisations get the income stream and the Government gets a cheque but loses some of its income stream through NZ Post. And there are now three organisations that are going to review Kiwibank’s performance.  The amount of treble guessing of matters is going to increase considerably.

National’s pollster thinks it is a good idea because the NZSF and ACC have professional fund managers “who will do a far better job monitoring the performance of Kiwibank than a couple of staff at Treasury”. Interesting that he thinks that National’s oversight of government activity is that appalling that it has to be outsourced. Although he may have a point.

This week it was confirmed that the Government had run Solid Energy into the ground with the business being sold to private entities and the expected return for creditors would be 50c in the dollar. On top of this the Government has assumed responsibility for acid mine drainage from the Stockton plateau at a current estimated cost of $36 million. A performance of this kind would lead to people losing their jobs in the private sector. Shame the same rules do not apply to this Government.

The Kiwibank deal is slightly different to that announced in April this year. Back then ACC’s share was 20% and now it has increased by 2%. As well as that the purchase price was reduced and parent company NZ Post had to leave a further $90 million cash in Kiwibank increasing its value.

James Shaw has been criticised because he has said that the transaction is the start of the privatisation of Kiwibank.  The NZSF and ACC cannot sell shares for five years and do need to offer the shares back to the Government first but given they have bought the shares at a discount the buy back could be expensive.  And a Government declining to buy the shares will mean that they will almost inevitably be sold to private interests.

If only the ministers of this Government could do their job properly this financial sleight of hand would not have to occur.

31 comments on “Kiwibank is being privatised by stealth ”