National is still refusing to give us any detail on its tax cut plan, indicating it doesn’t have one. But let’s do a bit of Kremlinology to work out what we might expect from them when they eventually get their act together.

The size of Labour’s tax cuts has spooked National. Key’s speech in reply to the Budget was a mess, and the Nats have been all over the place since. National continues to say its tax cuts will be larger but Key is now saying other things matter too (what other things and how he would somehow magically fix them, he doesn’t say). Key no longer talks about $50 plus for the average worker. Now, he says the Nat’s package “may be” bigger than Labour’s. This indicates that National has looked at the Budget numbers and seen there really is nothing left.

There are vague mutterings from National about cutting spending but they have openly pledged not to cut funding and inbuilt increases for health, education, welfare, superannuation, defence, and infrastructure. Working for Families and Kiwisaver are also protected although National hasn’t ruled out reductions. That’s most of government spending ruled out. There is nothing left for big cuts.

So, National’s cuts will not be much larger than Labour’s (or, if they are, they will be offset by WfF or Kiwisaver cuts for many families). Additionally, National says they will target their cuts to those on upper incomes. With the same limited pot as Labour’s cuts and more of the money going to the rich, less will go to most people.

The October 1 cuts will already be in place by the election. So, we’re looking at what National might do differently after them. It could raise the 39% bracket to 100K and the 33% bracket to 55K , and off-set that by not raising the start of the 21% bracket to 20K as Labour intends but keeping it at 14K. 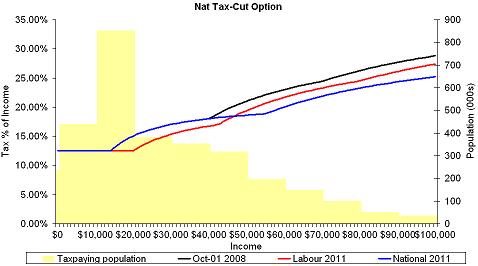 As ever with National, this can only be a vague suggestion of what they might do but it is clear that if National wants to prioritise cuts for the rich, it will mean smaller cuts for those on low and medium incomes.