The Key effect is over. That’s the conclusion you draw from the latest Roy Morgan poll. It shows National down to 41.5% and Lab+Green surging to 47%. The last time National polled consistently in this range was before Key became leader. Now Key’s no longer an asset, it’s only a matter of time before he’s a liability. The Collins and Joyce Factions will be sharpening the knives.

Also notable in the poll is that just 44% of people think National is leading the country in the right direction. That’s a 3.5% drop from the previous low since National came to power – and that previous low was the last poll before this one.

Labour’s 33.5% is it highest since the election. The Greens and NZF are also doing well (and I think we can put to sleep the idea of a Key-Winston deal, with Peters calling on Key to resign as GCSB minister and Key joking ‘where’s Winston’ while holding a nail gun yesterday). 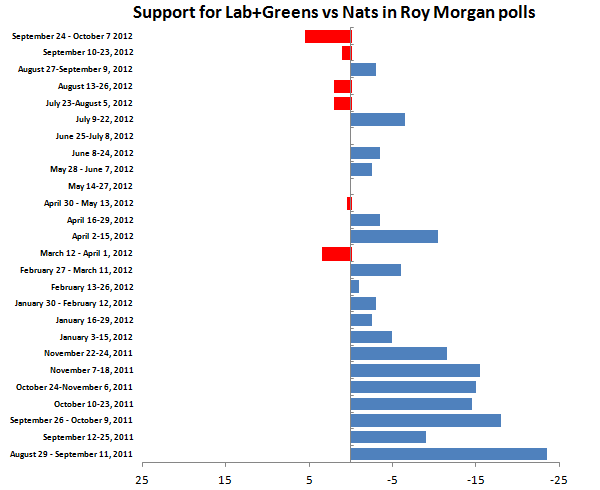 With more revelations on Dotcom every day and all the inquires still to report; with the job market tanking and Key refusing to acknowledge a problem as the opposition’s economic positioning becomes increasingly robust; with the Right of National increasingly putting the pedal to the metal to get through whatever extreme Right policies it can before leaving power; wnd with, frankly, the guy looking like he’s given up on any pretense of governing (he spent yesterday drinking at a brewery opening and then visiting a building site!) – how long does anyone think Key will last?

He will never go into an election he’s not very confident of winning. He’s too vain to risk losing.

So, will he go for an early election before all hope is gone? He could use Banks as the justification.

Or will he pray for a turn-around and then bail in early 2014 when it’s clear all is lost?

And how long will the backbenches let him lead when its their careers on the line?

On the current numbers, National would lose 8 of its 59 MPs.

Good times for the Left, but not as good as when we get Key and his gang out of office.

*why the hell is Blue so low on the list?

lprent: The poll is here.