Labor set to win in Australia 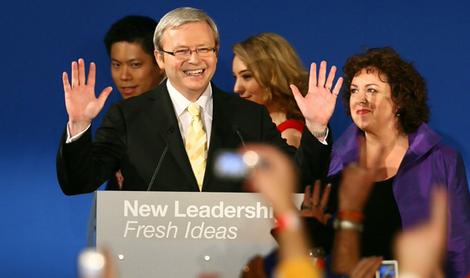 After 11 years of conservative rule, it looks like Kevin Rudd has led the Australian Labour Party to victory in Australia’s elections. All the networks have called it for Rudd and Labor.

Howard has just conceded (watch the video). Howard may well lose his own seat of Bennelong – he’s trailing with over 75 per cent of the vote counted.

Rudd has said his first priorities will be to sign the Kyoto Protocol on greenhouse gas emissions and withdraw Australian troops.

Though they may win as many as 80 seats of the 150 house seats, according to the ABC Labor may not hold a straight majority of seats in the Senate – the balance being held by smaller parties.

37 comments on “Labor set to win in Australia ”