Last Roy Morgan of the year

It’s First Past the Post thinking to look at the polling gap between National and Labour and conclude National will romp home. MMP is here and set to stay – it means the coalition with the support of a majority of MPs governs, not necessarily the largest party. The final Roy Morgan of the year lets us look at the trends in support for Left and Right.

So, what can we take from the Roy Morgans? The race is a lot closer than just looking at National and Labour’s numbers would suggest – and the gap is closing.

In this graph I’ve plotted the two major parties as well as ‘Right’ (National and ACT) and ‘Left’ (Labour, Progressives, Greens) over the past two years of Roy Morgans: 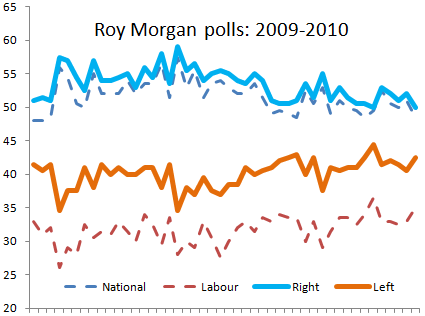 It doesn’t take a genius to see that there’s a turning point in mid/late 2009 and after that the gap begins to gradually close. Of course the numbers will jump around from poll to poll based on short-term events and normal statistical variation but compare the average Right v Left gap (this is the most important number to my mind) and net confidence in government figure for the four half years that National has been in power. I’ve projected the trend of the last three half-years into next year:

The gap is closing, gradually but surely. And it could be very close indeed by late 2011, which is why the smart money is on the election result being a lot closer than the current polls.

It would be foolish to say this process is inevitable, of course. And Labour’s leadership needs to pick up its act to get support into the 37-38% range where it needs to be. But the trend is away from National to the Left, that much is clear.

This makes me even more sure that Key won’t wait until November for an election. The gap is closing and there’s no reason to think it will turn around. If anything, Key had a lucky half year in the second half of 2010 with plenty of exceptional circumstances that favoured his smile and wave governance (the earthquake, for example) and the drop could resume more rapidly in 2011. Waiting until after the World Cup just throws in more unpredictable elements.

Finally, National knows that it will have sacrifice at least 5% of its support as the price of campaigning on issues like privatisation and cuts.

Whether or not the Left actually matches or overtakes the Right, it looks highly unlikely that National + ACT + Peter Dunne (if he makes it) will make a majority. Peters or the Maori Party become kingmakers in that situation and either of them could support a National-led or Labour-led government.

There’s a long way to go and it’s Labour, not the Greens, that will have to win back most of the extra support needed. That’s not impossible – most of the target voters have voted Labour in three of the past four elections. But they won’t get there if the campaign becomes a one-on-one personality contest and they have the more boring man in the room. Labour has to offer an exciting, radical economic vision to that not only works for the many but contrasts with the privatisation agenda offered by National that favours the few.

37 comments on “Last Roy Morgan of the year ”