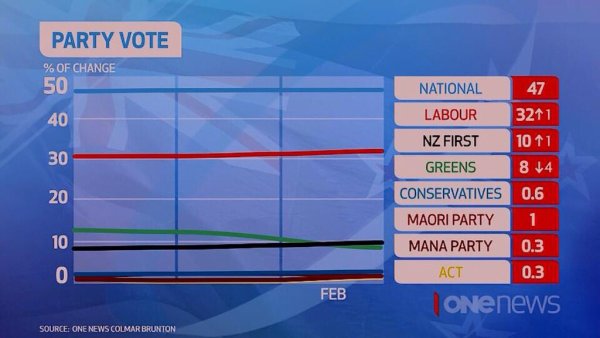 Last night the latest Colmar Brunton poll results were released.  One news chose to follow the line that it was good for National because the TPPA has caused no damage to its support.  Such simplistic analysis is par for the course and very frustrating.  It is the economy stupid that matters and most people are still feeling optimistic.  I believe the optimism is misplaced and the feel good aspect of the economy is based on burgeoning Government debt and the sugar rush caused by the Christchurch earthquake but a feel good aspect there is.

National remained on 47%, basically where it was after the last election.  But the Conservative vote is disappearing and this suggests that the right is slowly bleeding support.

Labour is up 1% to 32%, New Zealand First is on 10% and the Greens dropped 4 points to 8%.  The Green result is clearly an anomaly and they have done nothing to justify this drop.  The 14.5% result recorded in the recent Roy Morgan poll may be closer to its true level of support.

National’s support parties are dwindling.  The Maori Party is at 1%.  The others are less than that.

The combined Labour/Green/NZFirst vote is 50%.  The gifted seats of Epsom and Ohariu will continue to be critical.

Things are finely balanced.  If the economy heads south, and the disastrous current milk price is going to hurt rural New Zealand hard, then I expect that the polls will switch quickly.  Kiwis will tolerate all sorts of things as long as they perceive that generally the country is going in the right direction.  But all the Crosby Textor designed good will is going to be destroyed quickly if the economy is shown to be reliant on foundations placed in quick sand.

Of course in the next month there will be another poll and no doubt a completely different scenario drawn from the tea leaves.