As Irish has already noted, Fran O’Sullivan has savaged John Key’s record on employment and said that Paula Bennett is “too busy puffing her own achievements to pay much heed” to warnings on the dire long term-effects of high youth unemployment. What caught my eye was her quote from Key at the start. President Obama is looking for ways to bring down US unemployment, to which Key quipped “Maybe he’ll do a national cycle-way”.

Yeah, very funny. We’re so lucky to have Key’s national cycleway – all 40km of it. Just waiting on those 3,700 jobs he promised it would create. Meanwhile,youth unemployment is at 25%. 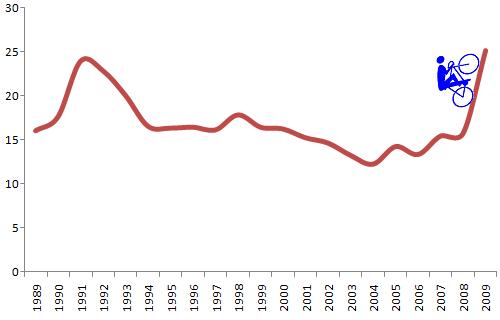 Actually, it’s not Key’s wee quip that pisses me off. It’s his sick joke of an unemployment policy. If only he could govern as well as he tells one-liners. Maybe he should stick to the stand-up and let someone who gives a damn about unemployed Kiwis run the country.