The original of this post appeared here at Local Bodies on Monday. It got overshadowed in the news cycle by burst of corrupt stench of self-entitled elitist behaviour from National, but is worth reposting anyway. bsprout (aka Dave Kennedy) is the Green candidate for Invercargill. 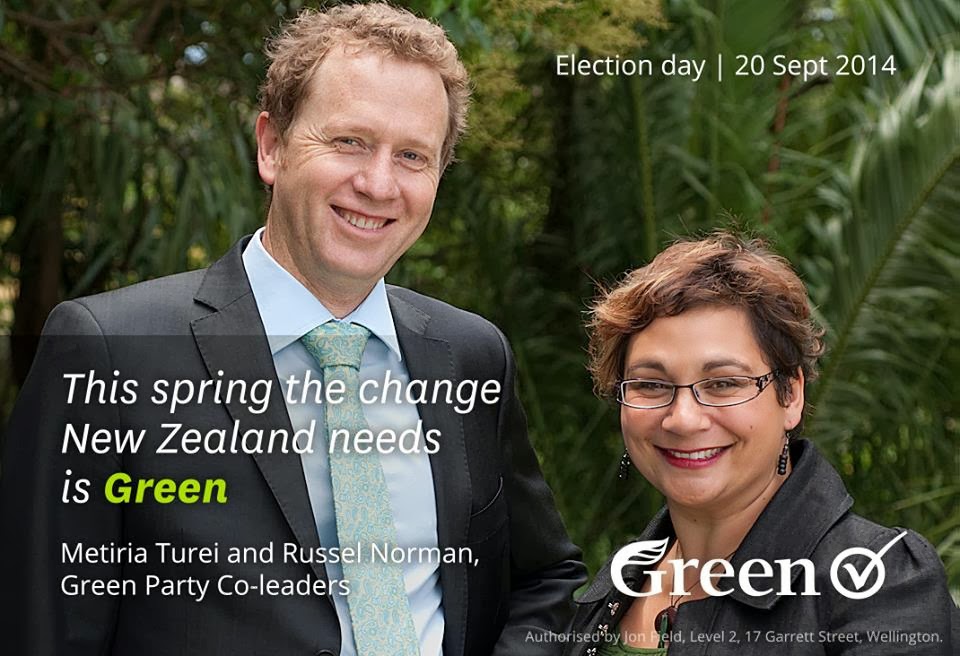 I am not sure what circles Josie Pagani circulates in, because they obviously aren’t green ones. In a Pundit post Pagani suggests that the left were caught on the hop with the election announcement and were not able to fully take advantage of it to launch their campaigns. I obviously can’t speak for the Labour Party, but the Greens have been in campaign mode for some time and few will have missed our recent policy announcements regarding our schools as hubs and solar homes initiatives (both very well received). As soon as Key announced the September date the above image was immediately circulated throughout social media.

This is a new era for the Green Party and we are now operating at a level that can clearly compete with National and Labour. Our party machine is no longer reliant on a few volunteers and we now have our numerous committees and networks managed by employed staff.

If anyone should question the ability of the Green Party to govern (or our credibility regarding financial management) they need only see how we manage our campaigns. Without the large corporate donations of National and Labour (we do not accept money from businesses that don’t support our values), we have learned to work efficiently and get the best bang for our buck. In the last election we spent less than half of what the Conservative Party spent and only slightly more than ACT and yet we managed to increase our vote by almost 70%. Far from being the ‘luddites’, as the fossil fueled National supporters label us, we are by far the most technologically adept party.

Our last two election campaigns were praised for having the most effective billboards and sticking to message. Our “Jobs, Rivers, Kids” themed campaign enabled our candidates to stay on message and keep the focus on what was important. This coming campaign will likely cover these familiar themes  (the real issues haven’t actually changed) but the framing will be fresh.

It is unfortunate that our elections have turned into presidential campaigns that have focussed much of the attention onto the leadership of the two largest parties. National have cleverly supported this approach because they never like real scrutiny of their policies (asset sales) and it means that they only have to take advantage of their celebrity styled PM and concentrate on discrediting the Labour leader. It is likely that the media will run with this theme again as it also makes it easy for them.

The Greens probably deserve to be included in the major leader debates (we can no longer be considered a minor party), however we must complicate things by having co-leaders and adding a third party.  This is a pity because both Metiria and Russel have become highly effective and credible leaders.

Russel Norman was first made co-leader of the Greens in 2006, the same year that Key became leader of National. Since 2008 Russel has often been referred to as the real leader of the opposition because of his solid performances in the house and the fact Labour is onto their third leader over this period. Russel has won credibility with his understanding of economics and his focussed questioning. Russel is not afraid to call things as he sees them and his likening of Key’s divisive and dismissive style of politics to Muldoon startled some, as has his firm stand against Colin Craig’s dated thinking. He is also very adept at dealing with a crisis in a very direct and transparent way (the billboard incident last election is a good example).

Metiria Turei is now one of our most experienced parliamentarians, she is into her 12th year as an MP and has been a co-leader for over five years. Her credibility as a hard worker and focused politician is clearly shown through tracking her career. Metiria was brought up in a struggling working class family and found herself in the situation of being a 22 year old solo mother with few qualifications. Ten years later she had a law degree and was elected as a Green MP, at aged 39 she was elected co-leader. Within the party Metiria is known for her sense of humour and infectious giggle, but also as an astute leader with the ability to show leadership in any situation where it’s needed. Metiria’s performance in the house has proved she more than has the measure of Paula Bennet, Anne Tolley and Judith Collins. Metiria has also been a ground breaker for women, being the first to speak on Te Tii Marae.

Perhaps Josie Pagani needs swap her red tinted lenses for green ones and she will then become aware of the strong, stable and dynamic leadership displayed by the Greens and the solid organisation and team work behind them. This spring election campaign will see progressive green messages sprouting through the current dead wood and promising a fresh, green approach to governance.