Let the Nats know that women matter too

National/ACT’s record for women so far has been dismal . Their work rights have been slashed by the Fire at Will law (women are disportionality employed by small businesses), they were all but excluded from the Job Summit (despite women being the most heavily affected by job losses and reduced hours), they got only a paltry 9 cent an hour minimum wage increase, and, then, Tony Ryall rubbed salt in the wound bycancelling two pay equity inquiries because they would have led to more expensive pay rounds. 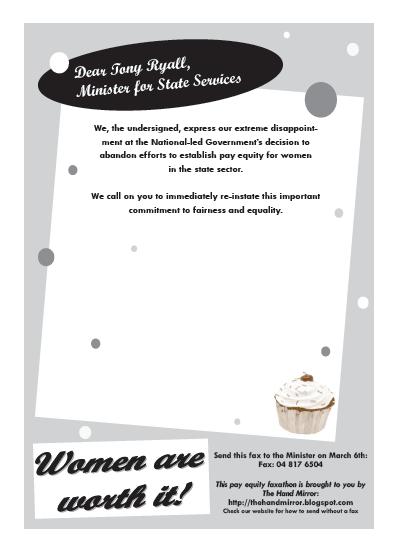 The Hand Mirror have organised a Faxathon for the 6th of March to coincide with International Working Women’s Day on the 8th.

You can download the petition form here. Inevitably, there’s a Facebook group, too. So, get some names on the forms and then fax them into Minister of State Sexism Services, Tony Ryall on 04 817 6504 on March 6.

I would suggest that you send them through to Key as well (04 473 3689). Unlike Ryall, Key is worried about preserving his popularity.

In fact, I would suggest to the organisers that they should get a group together and hand over a pile of the petitions outside Parliament on the day, a la the s92(a) action – good for the cameras, so more likely to get coverage and prompt a back down. You’ll be able get some friendly MPs or, at least, the ever-opportunistic Peter Dunne to accept the petitions from you.

34 comments on “Let the Nats know that women matter too ”