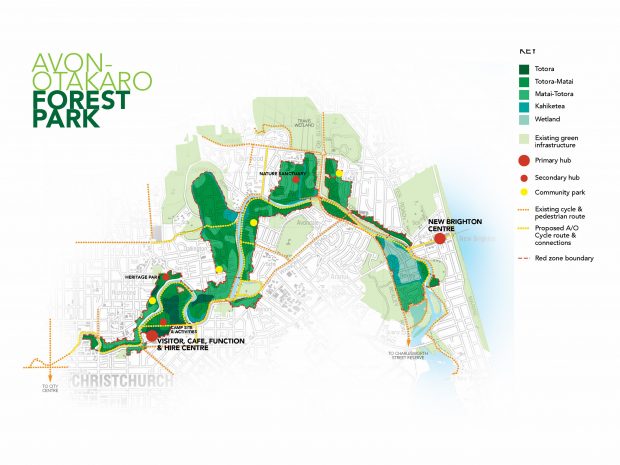 Climate change and our increasing numbers of cows means that New Zealand needs to plant trees, lots of trees.

And Christchurch has a major issue with land in the red zone that that is not suitable for building on and needs to have some use for it.  And there are flooding issues which trees and native bush are very good at addressing.

So what better solution would there be than to plant native forest in the red zone?  Green Christchurch, make it a better place to live in and suck up carbon at the same time?

And at an estimated cost of $2.5 million to achieve 80% cover why not?

Christchurch’s residential red zone could be turned into native forest for $2.5 million, a group in favour of the idea says.

Greening the Red Zone submitted its proposal to Regenerate Christchurch on Friday, saying 80 per cent of the Otakaro/Avon River Corridor, in the city’s east, could be turned into forest for that price.

The estimated cost, spread over five years, was based on the Tuhaitara Coastal Park in North Canterbury.

School and community groups have helped plant and maintain the 575-hectare park, between the Waimakariri River mouth and Waikuku, as part of a project to return it to native coastal forest.

“Ongoing annual costs in terms of management, labour and capital expenditure are likely to be around $250,000 per annum,” the Greening the Red Zone’s proposal says.

As at Tuhaitara, we anticipate that significant volunteer input will help to keep costs low.”

Great idea. Now all we need is a Government that will stump up with the cash and have the vision and environmental commitment to make sure that it happens.

If you want to fond out further detail Avon Otakaro project’s website is here.