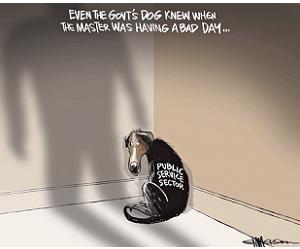 In days gone by the concept of Ministerial Responsibility would mean that any significant failing by a Department would see the responsible Minister take the blame for what happened.  Following the Malaysian diplomat incident it appears to have been replaced by a substitute concept, that not only is the Minister not responsible but the Government is entitled to attack a public servant in an attempt to divert political blame.

If this sounds somewhat extreme you only have to consider John Key’s recent statement to see that it actually appears to be Government Policy.  From Stuff:

A mid-level foreign affairs official appears set to take the blame for an incident in which a foreign diplomat accused of attempted rape was allowed to leave the country, a move his government thought had New Zealand’s blessing.

Yesterday Prime Minister John Key dismissed questions about whether Foreign Minister Murray McCully should resign, saying he would not accept it if he did, because McCully had been let down by officials.

He signalled that a Ministry of Foreign Affairs official who left the possible impression that New Zealand was not clear that it wanted the man to face justice here should assess their career options.

‘‘If that person doesn’t have clarity about that position then they need to think very strongly about whether they’re in the right job,’’ Key said. The situation had added to the distress of the victim by creating ambiguity.

‘‘That led to a situation that is unacceptable to me, and I think it is very distressing for the woman,’’ Key said.

There is to be an independent inquiry into how the ambiguity over New Zealand’s position was created, and why it took so long for Mfat to inform the Government that Malaysia believed it had acted in accordance with New Zealand’s wishes.  I am not sure why there needs to be one.  Key has clearly made his mind up already and told the public what the result will be.  This will make any potential Employment dispute interesting.  An employer is meant to have an open mind and give the employee a chance to make submissions before making a decision in a disciplinary matter and Key’s mind is clearly closed.

And this situation could have been managed better if McCully had not in a panic released into the public domain the two inter government communications without checking the background.  This required a public response by the Malaysian Government and instead of the situation being resolved through diplomatic channels it was resolved publicly through the media.  McCully let short term political considerations outweigh relationships with an important friendly nation.

Presuming that New Zealand did give a nod and a wink to Malaysia that they could remove their Diplomat from the country and presuming McCully had no hand in formulating this position and did not even know this was happening then the conclusion must be that MFAT is not working properly.  And the cause?  The Dominion Post editorial this morning gently suggests that the McCully reforms are to blame.

There remains a suspicion, after all, that the present shambles has its roots in the disastrous restructuring of the ministry under McCully’s watch. That “redisorganisation” led to a revolt of the ministry’s most senior staff and then to an apparently botched witchhunt ordered by State Services Commissioner Iain Rennie.

The whole project was misconceived and mismanaged, based as it was on the principle that the ministry could operate with far fewer experts. McCully blamed it all on his CEO, saying it was his idea and he had to face the music. This is nonsense. No bureaucrat would persist with a major restructuring that his minister opposed.

So now there will be an inquiry to find out who made such a hash of the Malaysian affair. Unfortunately, that inquiry will be narrowly focused and will not look at the wider problem of the botched restructuring and its effects.

This Government has a clear pattern of behaviour.  “Reform” Government departments by stripping out resources.  Then blame individuals when the inevitable happens and performance drops.