Local Bodies: “Government Given the Bums Up”

The second post, published on December 6, is a report on the protest against the government’s head in the sand approach: “Government Given the Bums Up!”  Both posts are copied below:

The Southland Times described a report from the New Zealand Initiative (NZI) claiming mining was the key to rural prosperity. Although listing a range of extractable minerals this appallingly ignorant report strongly supports coal and lignite mining as the road to rural prosperity.

The New Zealand Initiative is being disingenuous in its claims that mining will benefit rural communities. There are very few mining communities in New Zealand that are prosperous and the nature of extractive industries is that they have a finite life and generally cause negative social and environmental outcomes. In using Australia as an example of the benefits of mining The NZI ignores the damage caused to Australia’s rural communities. Australian farmers are leading the protests against coal mining and fracking with the Lock the Gate movement.

The well researched document Jobs after Coal explains the social and environmental consequences of coal mining and its chequered history as an industry. The NZI report only focused on the short-term earning potential and, based on past experience, much of the profits gained from any mining industry are not invested back into the local community. Most mining companies operating in our country (despite their names often including the words ‘New Zealand’) are actually overseas owned.

The NZI report also includes support for a dismantling of the RMA to allow for easier access to our minerals. Given the negative impacts that mining generally has on the communities they operate in, it is extremely important that a solid process is used to determine those impacts and full consultation occurs. New Zealand already has a reputation of being one the easiest countries in the world to do business in. Our Government’s willingness to subsidise and encourage fossil fuel extraction was given special mention in a brief economic overview of our country in a recent issue of The Economist: …”the offer of oil concessions will please investors” (The World in 2015, The Economist).

Our New Zealand Government is obviously influenced more by the likes of the narrow corporate interests represented in NZI than our climate scientists and local business people who are focused on a more sustainable future. NZI members are dominated by banks and investment companies and the New Zealand influence is debatable when it includes an odd mix of powerful multinationals, including BP and Imperial Tobacco.

Many of our most successful business people make up the Pure Advantage alliance and yet their championing of benefits of the green economy and our long-term sovereign interests are being actively ignored. It is hugely embarrassing to many of us who are concerned about the fate of our planet and future generations that our Government is not prepared to engage and promote those views.

At this very moment in Lima, the nations of the world are pledging huge reductions in green house gas emissions, the EU is aiming for a 40% reduction and the US is talking about reductions close to 30%. Per capita New Zealand is one of the worlds worst polluters and yet Tim Groser withdrew New Zealand from the second Kyoto commitment announced that a paltry 5% reduction by 2020 is the best that we can do.

What I have described provides a good background to the event that I am helping to organise this Sunday, the Invercargill Heads in the Sand protest. A good number of us are meeting on Oreti beach to demonstrate our frustration at our Government’s active refusal to logically engage with the real concerns about climate change. Oreti beach is best known for the fossil fueled dreams of one Burt Munro but this Sunday, from 11:30 am, it is our climate that will be our focus.

Similar protests are occurring on Sunday around the country.

Government Given the Bums Up!

From the North to the South, in fine weather and foul, Tim Groser and his Government got the bums up from New Zealanders. The nationwide Heads in the Sand protest today provided a physical expression of our concern that climate change deserved greater attention. Our Government Ministers need to get their heads out of the sand on this issue. 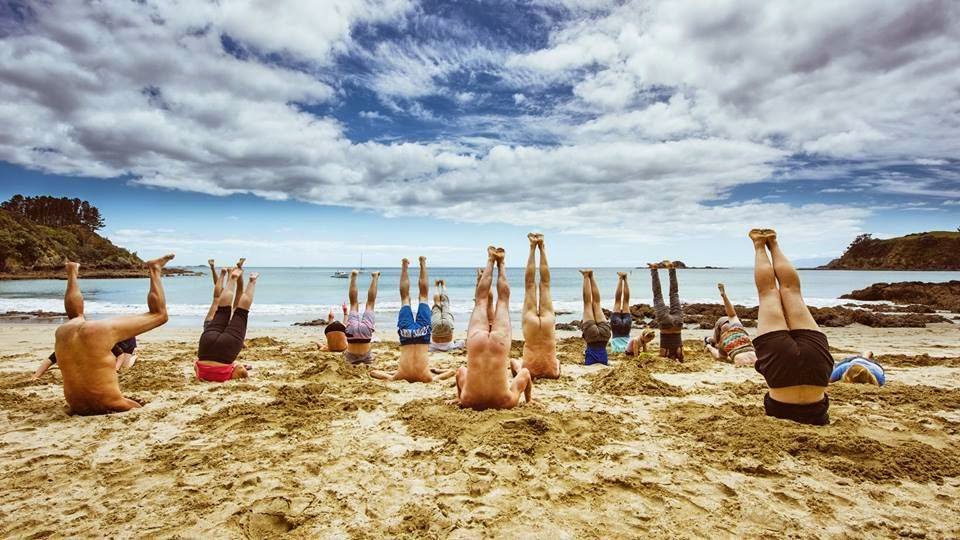 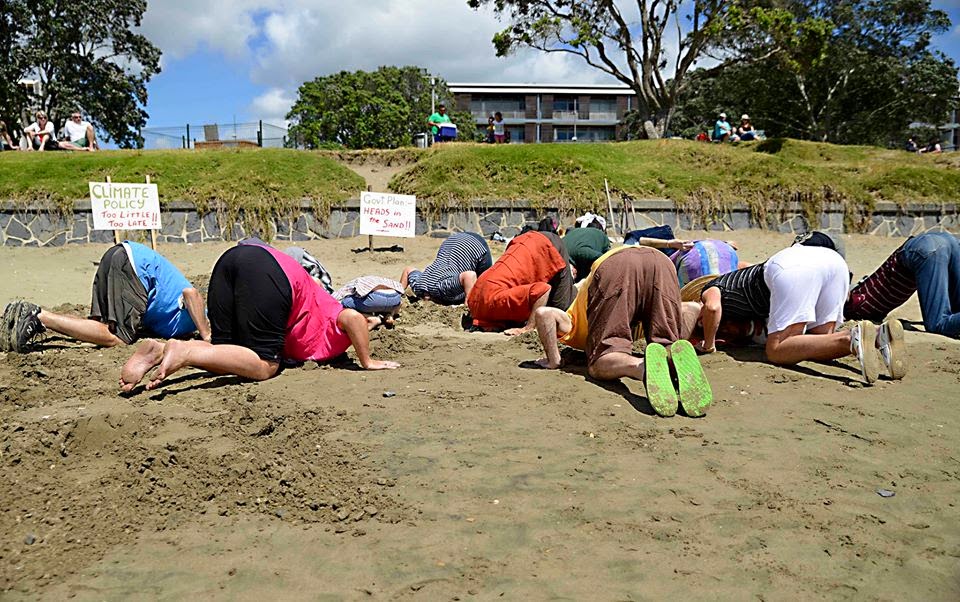 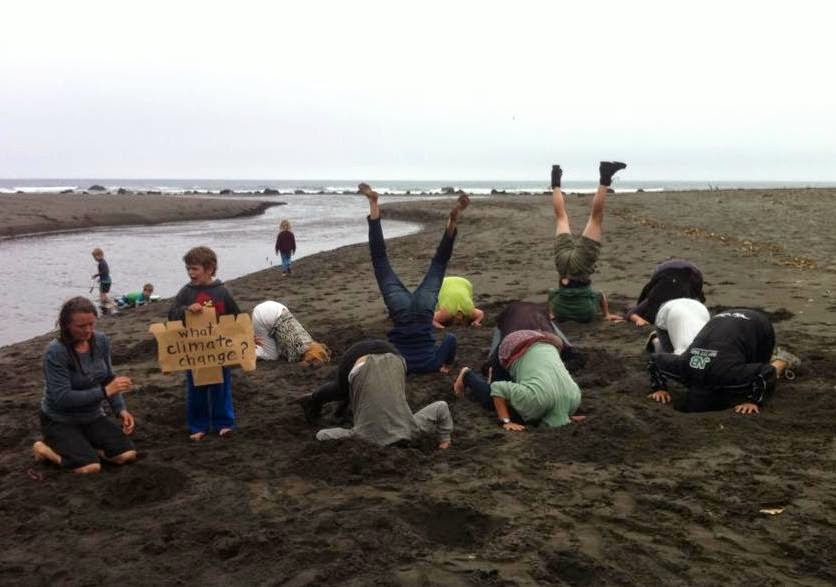 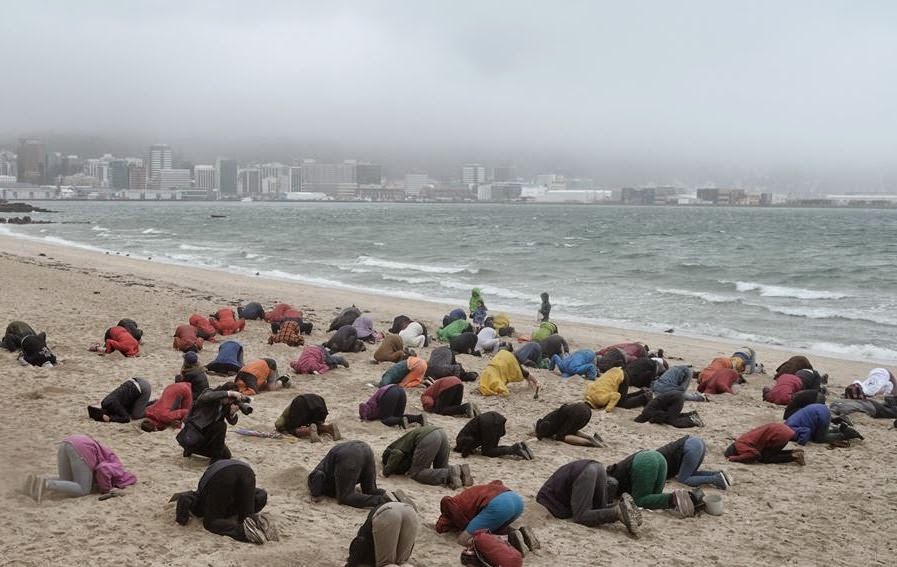 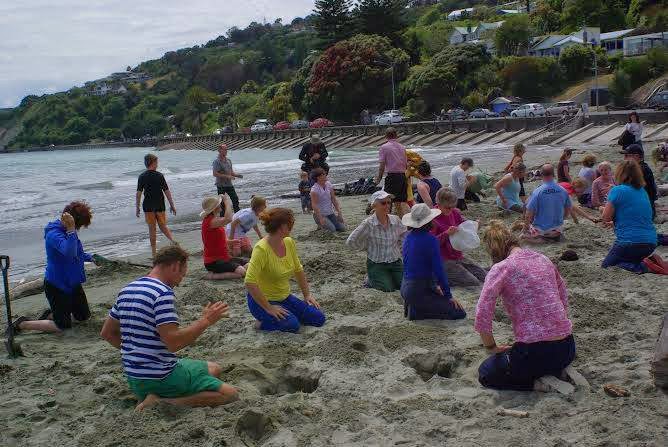 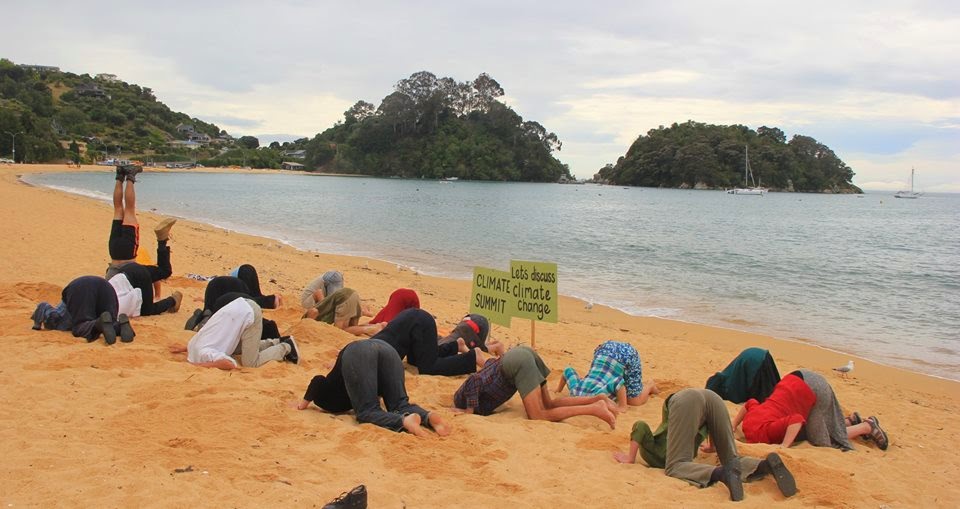 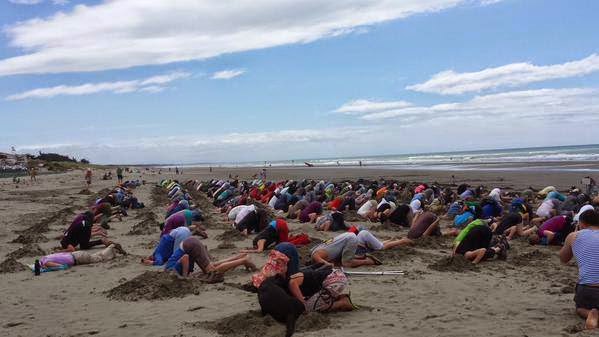 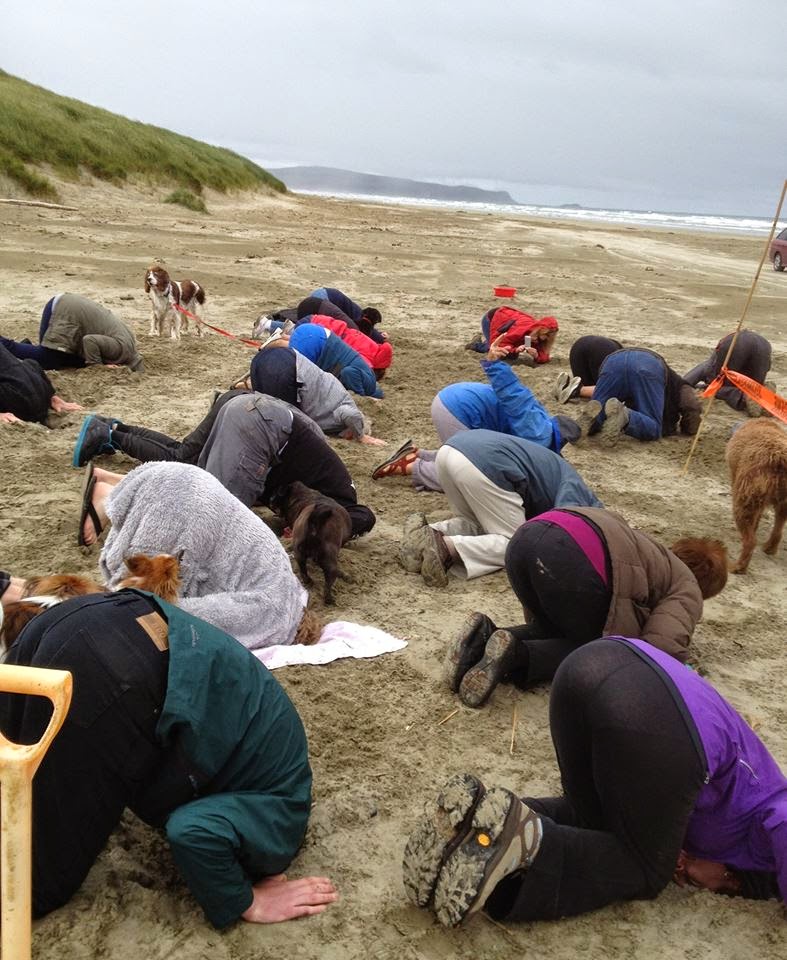 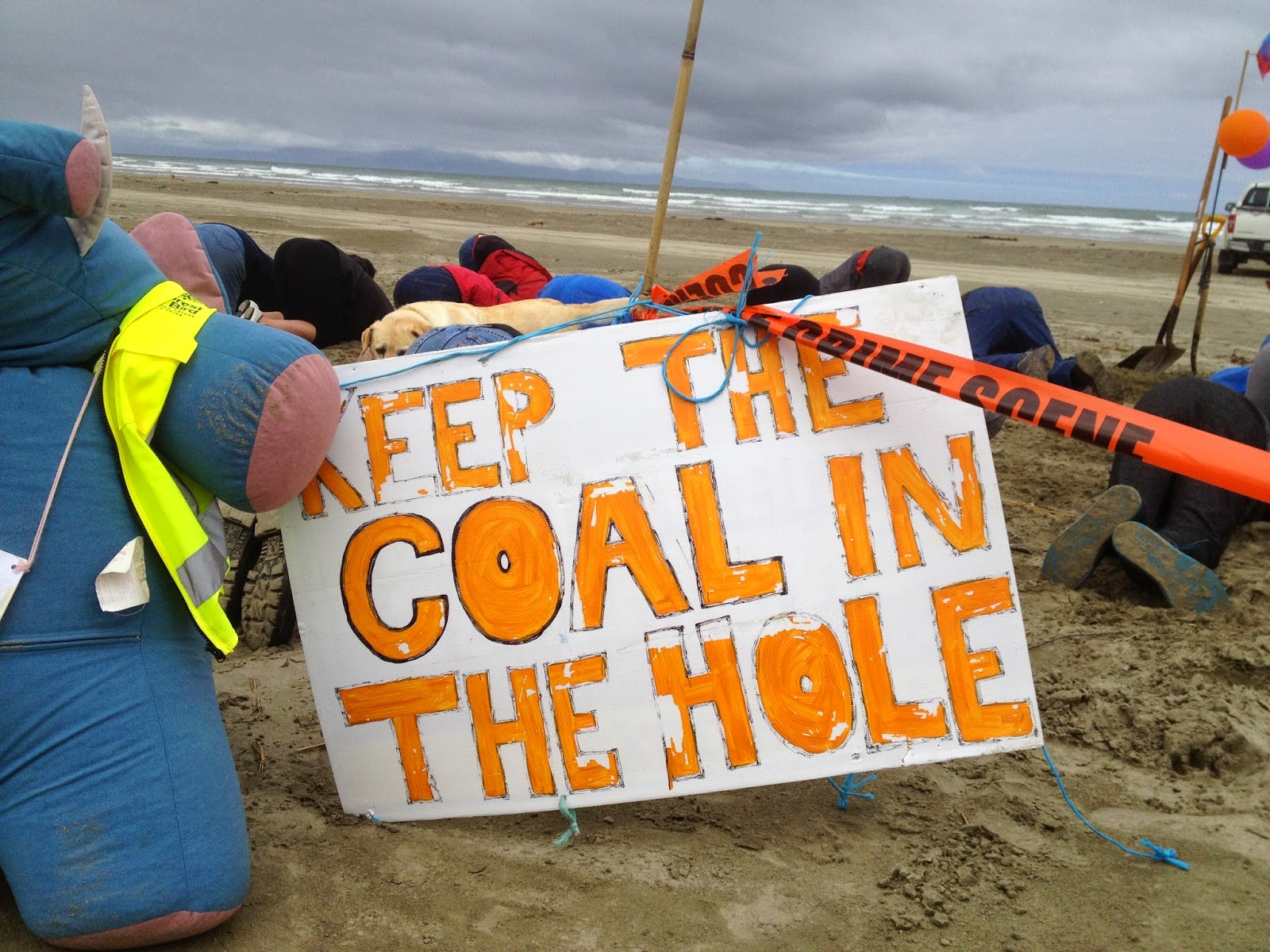 Fossil fuels are destroying our future! 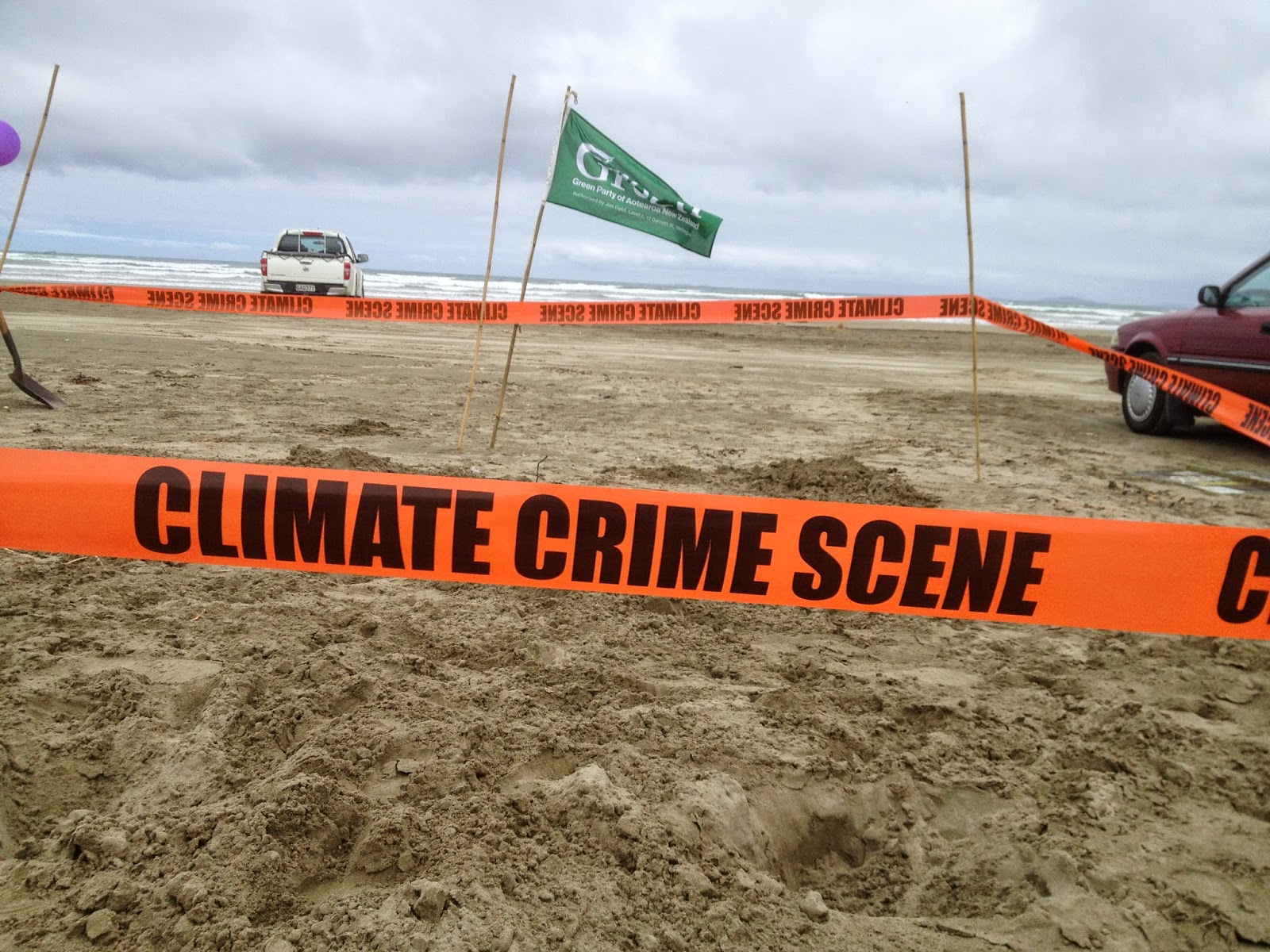 This Government is committing ecocide!

5 comments on “Local Bodies: “Government Given the Bums Up” ”