A steady stream of Northland logging truck accidents and roll overs in recent months have put locals on edge and made it to the national news media.

It has been reported that excessive speed, some of the lowest pay rates in the country and trucking companies accepting dangerously inexperienced staff have been core parts of the problem.

Of course, another part of the problem is that the National Government has taken it upon itself to continue to undermine the use of highly efficient and far safer rail transport, and instead increase the subsidies for heavy truck transport on our roads. 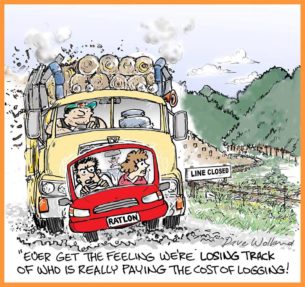 Northland’s Grow Rail lobby group has said that at this rate, tragedy is just around the corner:

Spokesman for Northland’s Grow Rail lobby group Albie Barr said local residents felt the situation was out of control and there had been talk of barricading Otaika Road. “They’re talking pretty drastic measures, and I don’t blame them,” he said. “The last truck that rolled on that bend, it happened at 2.30 in the afternoon, and there’s a school bus packed with kids that rocks along that road after three. But we’ve advised them not to take the law into their own hands. “Mr Barr said it was a matter of good luck, not good management, that no one had yet been injured or killed as a result of the rollovers.

He said log truck drivers were in some cases immigrants, inexperienced, or both, and under pressure. “They are poorly paid – they only get $16 an hour.”So the pressure is on them to do long hours, and to get in as many trips as they can from the forest to the port in a day.”

Growth in the use of heavy trucks to transport goods instead of rail has led to trucking companies importing labour from Fiji and the Philippines. A NZ trucking business owner said that these workers sometimes proved more reliable and more consistent than the Kiwi drivers he could find. 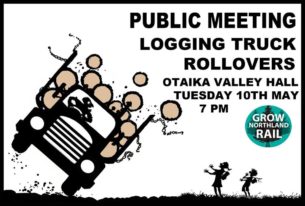 Now Northland locals are organising to bring pressure on trucking companies and the authorities to sort this mess out, before more people face injury and

death under a logging truck.

The obvious answer is to clamp down on these road destroying logging loads  and to Grow Rail.