In the UK, Cameron’s latest cuts have provoked a very public response:

Noisy crowd wielding banners, expletive-filled placards and pig effigies descend on capital from across the UK

An anti-austerity march in London has attracted tens of thousands of people wielding banners with slogans, expletive-filled placards and pig effigies.

Protesters descended on central London in hundreds of coaches on Saturday to voice their outrage at the cuts imposed on public services by David Cameron and his government.
…
The shadow chancellor, John McDonnell, told the crowd a Labour government would end austerity. “We will halt the privatisation of our NHS and make it public once again,” he said. “And for all those people desperately waiting for a home, I can give this promise. We will build the hundreds of thousands of council homes that will end homelessness.”

“The Panama revelations demonstrate that they have been robbing us for generations now,” he added. “We will make the rich and corporations pay their way in society.” …

Ever wondered how to downplay a colossal protest? Compare @BBC's #4demands headline to the @Independent's. pic.twitter.com/JYOh7pwOkn 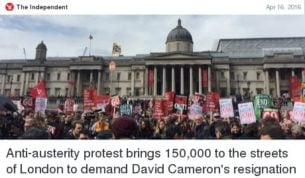 9 comments on “London – tens of thousands march against austerity ”