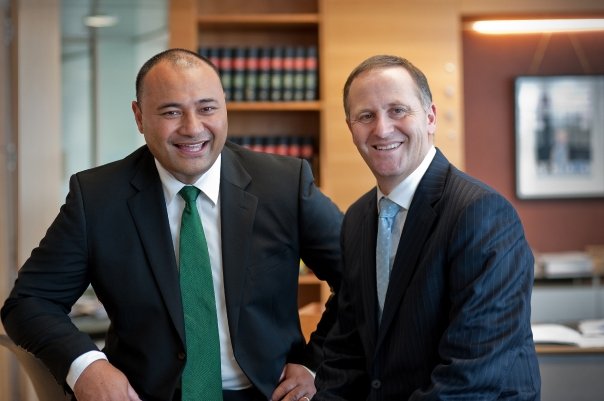 MP for SERCO, Sam Lotu-Iiga, chats with John Key after graduating from the Simon Lusk School of Politics.

The clearing of the decks continues.  Peseta Sam Lotu-Iiga has announced that he will stand down at the next election and will no doubt lose his Ministerial warrants this weekend when Bill English announces his cabinet reshuffle.

To be honest I consider his retirement will hurt National.  He is one of the candidates who gave National the impression of being respectful of different ethnicities and he performed pretty well in this role.

It was not always like this.  Back in 2005 Don Brash probably blew the election when he gave this remarkable interview full of dog whistle basically claiming that people of different ethnic groups including Maori and also gays were not “mainstream” and the Government should not “pander” to them.

No doubt he had been caught up in his rhetoric from his earlier Orewa speech.  Thankfully a plurality of New Zealanders rejected his divisive world view although it was a close thing.

PRESENTER: Okay. Let’s have a look at some of the other things you said over the weekend. You talked about mainstream New Zealand. What does that mean precisely?

So if you’re Maori, you’re not a “mainstream” (meaning “real”) New Zealander in Dr Brash’s eyes. But it doesn’t stop there:

BRASH: Well we know also that Government has been focusing on prostitution legislation, civil union legislation, all that kind of stuff, which caters for a small minority of people, while neglecting…

In other words, this is about social liberalism, “political correctness”, Labour’s efforts to expand opportunity and erode privilege, and ensure that every New Zealander is treated fairly and equally, regardless of race, gender, or sexual orientation. But its clear that Brash doesn’t agree with that struggle, because he doesn’t see gays as real New Zealanders:

PRESENTER: No, I just want to pick up on something else here. You talked about civil unions. Does that mean you do not regard gay people as mainstream New Zealanders?

BRASH: Well they’re clearly not, they’re a small minority of people, but let me be clear. I made it very clear in the debate on that issue that I thought this should be dealt with by referendum because it’s a big change in the civil institutions of society. I also said that in the referendum I would vote for it because I have no problem with same sex couples committing to live together faithfully as heterosexual couples do.

PRESENTER: You simply don’t regard gays as part of mainstream New Zealand?

BRASH: Well they are clearly, by definition, a small minority of New Zealanders…

Following the loss National reviewed the reasons and realised that its racist redneck dog whistling did not work and in an increasingly diverse New Zealand it recognised the risk that it would be in a permanent minority.

Then along came John Key with his pleasant demeanour and his trip to Waitangi with Aroha Hudson and his talk of an underclass and how the State had to help.  These were pleasant words and statements designed to create a completely different perception to that which Brash had created.

As said by Bryan Gould the intent was to present a socially liberal front so that the important work of achieving right wing economic reforms could be progressed as quickly as possible.  From the Herald:

John Key certainly had important political gifts, likeability and the ability to communicate and relate to people. Much of the Opposition’s effort was devoted to trying to negate those advantages, in the hope the feet of clay they were sure were there would be exposed to the public gaze.

They failed to understand that the battle was not one of personality politics, but real politics.

The personality was merely the means by which a deadly serious re-making of New Zealand – along ideological lines – was being undertaken.

If we review the Key years, the trends are unmistakable. Business interests have been given top priority, social and environmental issues have been increasingly relegated to the second or third rank. Public assets have been privatised and the public sector and public spending have been subject to constant cuts, the law has been changed when required to suit the interests of overseas corporations.

Lotu-Iiga was an important part of the makeover.  Along with Hekia Parata, Melissa Lee and Kanwal Singh Bakshi he was placed in a winning list position in 2008.  He did better than expected and won the Maungakiekie seat then retained it at the last two elections, each with a 3,000 majority or less.

He was a difficult candidate for Labour.  Being Samoan with a law degree gave him considerable cut through into areas of traditional Labour strength.

There were negative aspects about him.  His use of Simon Lusk as a campaign adviser cast doubt about his success and his judgment. And his handling of the Corrections portfolio was poor although anyone would have struggled with the Serco contract.

Now that he is gone the seat is up for grabs.  Labour’s candidate Priyanka Radhakrishnan is very capable and highly rated by the party.  These are early days but the seat may now be hers.