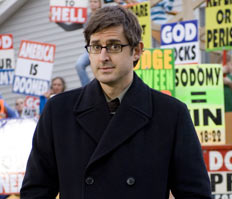 I used to love Weird Weekends – a BBC show that aired here late at night several years ago.

It was hosted by Louis Theroux (pictured) and involved him documenting time spent with ‘fringe’ groups – UFO hunters, professional wrestlers, female bodybuilders and so on.

I watched a more recent show of his a couple of weeks ago “Louis goes under the kinfe” where he interviews the practitioners and consumers of cosmetic surgery before getting a little liposuction himself. Clearly committed to his art, Louis is also genuine and engaging and you get the feeling that people confide in him in a rather unique way.

I was delighted to see that Louis’ latest installment “The most hated family in America” is screening on TV One at 9:30 tonight.

At the heart of the documentary is the Westboro Baptist Church (WBC), a U.S. church group headed by Fred Phelps and based in Topeka, Kansas. It runs the website GodHatesFags.com,[1] and GodHatesAmerica.com, and other websites expressing condemnation of homosexuals, Roman Catholics, Muslims, Jews, Sweden, Canada, and other groups.

Louis has apparently commented that they’re among the most extreme people he’s met. High praise indeed.

10 comments on “Louis Theroux back on TV here tonight ”