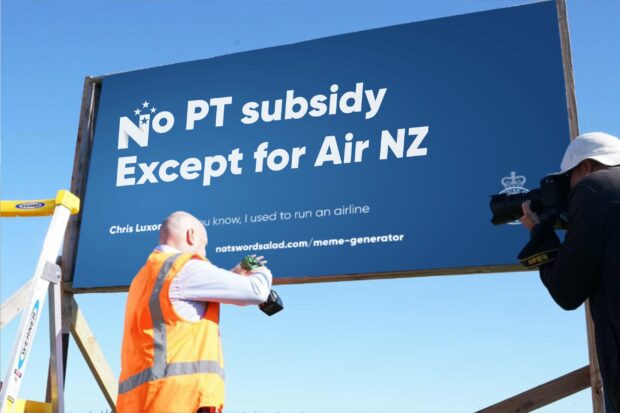 Yesterday Chris Luxon showed the sensitivity and sophistication of someone who owns seven properties and at one stage had 6.1 million Air New Zealand shares by stating that he believed that at least some public transport services should not be supported and that public transport needs to stand on its own feet.

When asked if the cut-price subsidised fares were something he would like to see extended further, National’s Christopher Luxon said he believed services should not have to be propped up by taxpayers.

“There’s a need for us to continue to drive mode shift, I get it, but you’ve got to build good-quality public transport options that people choose to use.”

While it had been helpful to help people right now with the cost of living crisis, it needed to be revisited, Luxon said.

“But ultimately, public transport needs to stand on its own feet. It can’t be subsidised or underwritten … it has to be able to build on its own case,” he told reporters.

How tone deaf can you get.  Following on from National’s announced tax cut that would see most Kiwis get no more than $2 per week while Luxon and his mates received huge tax cuts this attack on public transport is bizarre.

The reality is all transport is subsidised and you’d think a former leader of an airline that only exists today due to multiple government bailouts would understand that well.

Michael Wood also skewered Luxon very well in this statement which I will set out in full:

Luxon has since tried to walk back his comment and has said that he misspoke and he did not express himself very well. He also disclosed that he was not sufficiently organised to arrange meat free days for himself.

The most benign interpretation that can be put on all of this is that Luxon admits that he is not accurate with what he says and he is not sufficiently organised to get himself a salad.  And that he is completely indifferent to public transport as people with his wealth normally are.

The darker interpretation is that he is totally indifferent to the environmental as well as the important role that public transport serves for ordinary people.  And if he ever became Prime Minister public transport would get hammered.