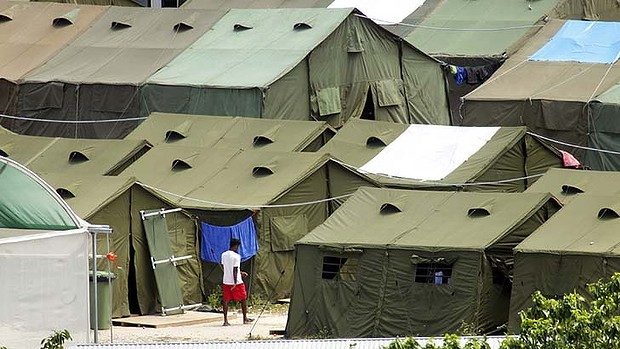 The Government is in the process of selling Housing Corporation houses throughout the country. In Christchurch it has shortlisted applicants to buy 2,500 houses. One of the applicants is partially owned by a company involved in management of the Manus Island Detention Centre.  I am not making this up.

One of the consortiums shortlisted to buy Housing New Zealand homes in Christchurch has links to a company accused of human rights breaches on Manus Island.

The government is seeking proposals from three preferred groups before deciding which one will be chosen to purchase 2500 houses in the city.

They are all made up of existing housing providers and investment firms and would be required to continue operating them as social housing and not sell them to the private sector.

One consortium is made up of housing provider, Trust House Limited and Broadspectrum New Zealand, a subsidiary of a larger Australian-based business in charge of operating the controversial Manus Island refugee detention centre.

Broadspectrum, along with the Australian government, this month agreed to a $73 million out of court settlement with detainees after they said they were mistreated.

Manus Island is a weeping sore on the face of the planet. Broadspectrum (previously Transfield) took over the management of the Detention Centre in 2014.  It was warned repeatedly about human rights violations and the No Business in Abuse group ran a divestment campaign against Transfield.  It cost the Australian Government and Broadspectrum $70 million plus costs which is a truck load of acknowledgment that the Government and Broadspectrum behaved appallingly and that refugees’ rights were breached.

Australia’s treatment of asylum seekers is, well words escape me.  The politicisation of the issue is appalling.  Who can forget John Howard and others claiming that Asylum seekers on the Tampa boat had thrown children overboard to increase their chances of having their claims approved.

And the current Liberal Government is just as bad.  At the top of the list of miscreants is Immigration Minister Peter Dutton.  Perhaps the most appalling thing he has done is to defend attacks by drunken PNG soldiers on refugees by insinuating that the refugees were child paedophiles.

But back to the story at hand.  Using an organisation that has been successfully sued for the human rights violations of refugees on Manus Island a contractual right to handle much of Christchurch’s social housing, what could possibly go wrong?