In the world of post-truth politics, science is under attack. The March for Science is an international movement to fight back: 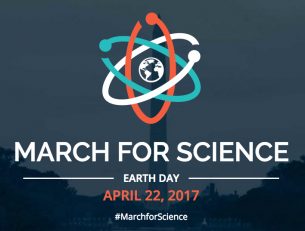 The March for Science is the first step of a global movement to defend the vital role science plays in our health, safety, economies, and governments.

It’s time to get off the sidelines and make a difference.

The March for Science champions robustly funded and publicly communicated science as a pillar of human freedom and prosperity. We unite as a diverse, nonpartisan group to call for science that upholds the common good and for political leaders and policy makers to enact evidence based policies in the public interest.

The March for Science is a celebration of science. It’s not only about scientists and politicians; it is about the very real role that science plays in each of our lives and the need to respect and encourage research that gives us insight into the world.

Nevertheless, the march has generated a great deal of conversation around whether or not scientists should involve themselves in politics. In the face of an alarming trend toward discrediting scientific consensus and restricting scientific discovery, we might ask instead: can we afford not to speak out in its defense?

There is no Planet B. Join the #MarchForScience.

We, the people, march for science and knowledge to be reaffirmed as fundamental to the democratic decision making that supports society in Aotearoa New Zealand.

We add our voices to the chorus supporting US and international scientists who oppose recent political events that damage and undermine science and its use in the public interest.

We stand in solidarity with those academics, scientists, and public servants in Turkey and the US (and other places) whose expertise is questioned because it is politically expedient to do so.

We gather together, as citizens of the planet, to march on Earth Day, 22 April 2017, as planned changes to the management and storage of climate change data in the US, and attempts to silence scientists, have brought the Doomsday Clock closer to midnight.
…
Climate change, earthquake resilience and freshwater quality are only a few of the serious issues that depend on science and knowledge to protect the New Zealand public: it is not for scientists that we march, but to protect and insist on the ways in which science and knowledge are a shared human good. Scientists are often uncomfortable with making political protests, in the belief that scientific evidence should not be affected by political choices. There may be a range of policy positions and prioritisations that are rational responses to scientific data – for example the kinds of policy choices that will be necessary in formulating a global response to the problem of climate change. However: political decisions to ignore or undermine the provision of scientific data require a response.

We believe that the March for Science in New Zealand must be non-partisan. We welcome participants from, and supporters of, any political party in New Zealand – what we march for is the ability to make good, long-term policy through multi-lateral agreement, on the basis of respect for knowledge and evidence. To move towards this goal, we need to stand for the values of science – together. We wish to absolutely clear that the March is open to all who care about what science stands for – both nationally and internationally.

On this day we ask all political parties and employers of scientists and researchers to commit to honour the principles of scientific integrity.

The NZ events are:

Auckland
The Auckland March will take place in the afternoon of the 22 April, from the bottom of Queen St to the Albert Park Band Rotunda. More details TBC – please check the Facebook event!

Wellington
The Wellington March will end at … where else?  The Beehive.  Watch the Facebook event for more information.

palmerston north
Meeting 11 am, The Square – more details to come on the Facebook event page

Christchurch
The Christchurch March will be from 10 am, from outside the Canterbury Museum, down Worchester Street, to Cathedral Square. More on Facebook

dunedin
The Dunedin event will be at Otago Museum Reserve from 11am-2pm, with music, a science show, food, speakers and more! Check Facebook for more details of the programme.

queenstown
In Queenstown, there will be a distinctly Wakatipu event – stay tuned for updates.

Governments and vested interests can try and ignore facts, but it won’t end well. Facts will have the last laugh. Get along to an event near you if you can, and stand up for science!

Further coverage:
March for Science: Organisers look to the positive
NZ scientists: why we march this Saturday
Thousands to march for science on Saturday