Massey to go the way of Saddam and lose statue? 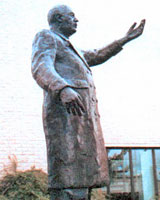 Massey is remembered without affection by trade unionists here for the mounted special police known as “Massey’s Cossacks” who were used to hunt down strikebreakers in 1913.

Auckland historian and ACT party member Dr Michael Bassett says removing Massey’s statue would be over the top because he was “not an extremist”.

However Bassett says in his biography of Peter Fraser that a colleague of Massey described him as “unimaginative as a clam … he goes his way guided by a hard, cold obstinate bigotry, which is proof against argument, entreaty, ridicule and the lessons of the past.”

Massey led the Reform party, the hard right group that led through Coates (equally unsympathetic to working people during the depression), and after the merger with United to form the National Party in 1936 to Holland, Brash and now Key.

It’s no surprise that Brash supporter Basset also judges him kindly but he sounds like an extremist to me. They never change.

11 comments on “Massey to go the way of Saddam and lose statue? ”