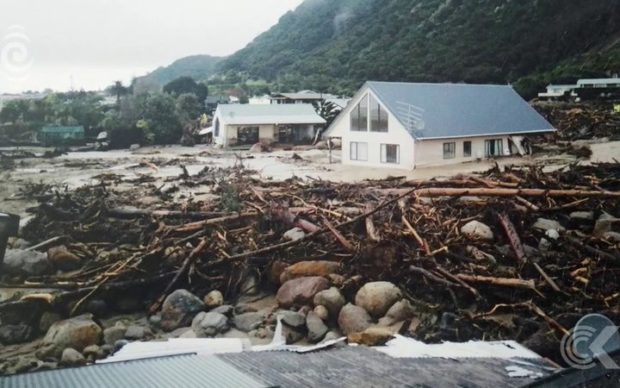 Many a bold claim has been made for the necessity of responding to climate change, but when it comes to storms affecting one’s own home, Matata is surely the test case of this century.

It was May 2005 that brought a torrential downpour onto a small coastal plain, where boulders and logs and debris destroyed 27 homes and racked up at $20 million bill just to clean it up and get basic services back in.

At RNZ, John Campbell went through some of the detail of compensating locals for this loss.

Residents were allowed back into the area in 2006 because the Whakatane Council believed it could build a structure to contain debris in a similar event.

Six years on it just gave up. So the Council wanted to make a District Plan change which would rezone the Awatariki fanhead as uninhabitable.
Instead they are now on their way to make offers to the property owners. It’s voluntary.

Unlike Christchurch, or Kaikoura, in which massive earthquakes occurred and in response huge government agencies rolled in and put things to right. In Christchurch’s case, large swathes of coastline were quickly confirmed as uninhabitable and people have been long since paid out.

Now, most New Zealanders are poor. If they own a house it’s by the skin of their teeth, and Matata is no exception. Matata is a very small settlement. Some people will choose to stay despite all the known risks and despite being offered market rates a legal costs and some relocation costs, and no discount for the likelihood of being hit by further debris. Some people are like that.

Unlike Westland District Council, Whakatane Council doesn’t go out the media and bleat about how unfair life is. They know they will need to squeeze some extra funding from somewhere, and they’re working on it.
It’s also quite different to the approach by Auckland Council to flooding in Piha Chair of the Environment Committee Penny Hulse said that she wasn’t ruling out buying some of the affected houses, but “[w]hatever we do in Piha, we need to be prepared to do around the rest of the Auckland region. We’ve actually got a city that is facing a huge, huge amount of strain through the impact of climate change, increased flooding and increased incidents of high rain events. We have to really look at what we’re signing up the rest of Auckland to.” So far, no actual solutions implemented.

Kaeo in Northland is another such settlement, full of people with very little money, plenty of plans from the District Council about engineering this and that, but sure as the sun rises there’s another flood coming there and they will get frequent and bigger. It’s too big for single householders to handle.
It’s fine for councils to endlessly consider processes and options, but what it doesn’t account for is the massive amount of strain it puts on the lives of ordinary kiwis struggling like their lives depend on it to defend their homes as the one thing that keeps their future literally and figuratively above water – these are people who can’t afford to go several rounds armed with geotech engineers, Public Works Act law specialist lawyers, and structural engineers, who can win against a council and protect their hard-won little piece of land and house.

It’s one thing to point out that local councils don’t have a policy framework for assessing the impact of increased flooding on settlements. Not every council has reams of policy staff. But it’s another if you’re a citizen trying to hold Councils to account for not anticipating the damage: without a policy framework the ability to hold them to account is negligible or prohibitively awkward and costly.

We’ve had the ETS draft legislation, which is fine if you are regulating gases and carbon flows.

But what we need is a whole new legislative and executive framework for dealing quickly with the effects of climate change flooding and their effects on New Zealand settlements with actual families inside them. Councils large and small are manifestly unable to deal expeditiously with flash flood impacts upon whole settlements. It’s not as if they haven’t seen this coming.
We need legal redress mechanisms that put fast statutory time frames similar to Building Consents in which the clock ticks on Councils to respond and implement the solution – whether it’s cash to get out, or District Plan Change/’managed retreat’ solution, or an engineering solution. And financial penalties upon councils for not complying.

It should include putting faster statutory time frames around responses from the EQC.

It should include some hard time frames around responses to claims to a Council through the Public Works Act.

It could include a ready reaction force within NZTA – although their contractors readily help out with the diggers anyway as was the case in Westland this year.

It could include a section of the NZDF dedicating their engineering teams to responding to New Zealand events.

It could mean amending Council Long Term Plan requirements to include showing how all councils have budgeted for areas most vulnerable to storm events, and tasking public auditors to ensure that is in there.

After all if the Reserve Bank can require banks to put aside a whole bunch more contingency for a financial rainy day, it’s time for New Zealand’s councils to do so for an actual rainy day.

For the citizens of Matata, being told by Council there was an engineering solution, then after years of waiting being told it’s too hard, is totally unacceptable. There is no justice in that anywhere. It would be unacceptable for anyone who has had that scale of disaster happen to them.

It’s a disgrace of governance to put false hope into a small and poor community.

It’s not as if we haven’t had practice in recovery. This government needs to take the site-specific legislative solutions it took to the Christchurch earthquakes, and the executive implementation solutions it took to Kaikoura, and start bundling them into ready packages for flood-vulnerable Councils.

Way back in the late 1970s were a series of massive floods in Southland that actually meant that the entire settlement of Kelso was forcibly removed. But now, even keeping the remaining roads open gets too hard.

Time to require Councils and government departments to prepare for impact.