Meanwhile, in the provinces

The biggest story of the day according to Stuff comes from the Taranaki Daily News:

I love that headline. I think it’s the fact that they’ve emphasised that the goat is old to make it a more pitiful character. 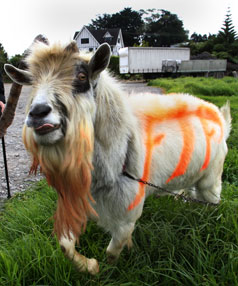 I’m not sure what’s ‘cruel’ about spray painting the goat though. I mean, it’s not cool but I doubt it notices some paint on its fur. It probably does notice being chained up all day long though.

Also, if they’re so worried about the goat’s feelings about its appearance maybe they shouldn’t be describing is as ‘defaced’ as if it’s some inanimate piece of property.

If only it could have put on a frowny face for the camera.

46 comments on “Meanwhile, in the provinces ”