One of the things that I like about the Horizon poll is that it is unashamedly qualitative and highlights data beyond what is required for Paddy Gower or Mike Hosking to build a ‘fact’ soundbite out of and then to bullshit wildly about the makeup of governments.

Given the usual infrequency of the published polls in NZ, there is barely enough red meat on them for even a vegan to get upset about 😈 Yet we have the idiot talking heads making public obscene sucking noises trying to suck out the gristle of meaning from long dead bones… Ok – that is a ‘discussion’ for later – about the desperation of the media to find something to waffle about.

“Who’s going on honeymoon with the new Government” from Horizon gives a demographic breakdown of their poll between October 24 and November 1. It provides some interesting insights on who the ecstatic and grumps are. The more useful tables are in this document (docx).

First some relevant information – this is an online poll and ..

Results are from a nationwide omnibus of 1068 adults representing the New Zealand adult population at the last census.  Weighted by age, gender, ethnicity, personal income, region and party voted for in 2017, at a 95% confidence level the maximum margin of error is +/- 3%.

You can read the report, and I have tossed some of the eyecandy further down. But I found this one be the most interesting in terms of a political impact for the coalition.

Which party people voted for in September is also strongly driving people’s outlooks.
92% of Labour voters and 91% of Green voters are feeling confident the new government will be good for them personally.

57% of New Zealand First voters feel positive, 20% negative, 24% neither positive nor negative, indicating the party’s voters are more satisfied than dissatisfied with the decision to form a coalition with Labour, supported by the Green party.

Effectively this indicates exactly what you’d expect the spread to be like across the political spectrum.

The Labour and Green supporters recognize a left coalition as being something that they wanted to represent them.

As a centrist populist party, NZ First is more divided but largely split into its left leaning and much smaller right leaning rump with a characteristically small undecided cohort.

National has a majority of their voters against, but also the large number of wait and see.

And as an aside, who gives a shit about Act voters opinions. At 0.5% of the party vote in a poll of 1068, there should have been only  5-6 of their voters polled.

Those on highest personal incomes are least positive.

Which if we ever got a breakdown of the demographics of National voters would pretty well describe their support levels by income.

But percentages get less interesting when you break that down the sample in the tables for :-

So I’d guess that the order was more a ranking for National party donors and their tax cut welfare recipients rather than those that they ran their punitive campaign of theft with GST increases and scattering homeless on to the streets through cuts to welfare for people.

You see the same kinds of trends throughout the data. It leaves you wanting to see more cross-correlations. For instance in the data for single person households, there is a massive 41% of 186 sampled who were neither positive nor negative.  It makes me wonder if it is related to elderly single person households or to young professionals. 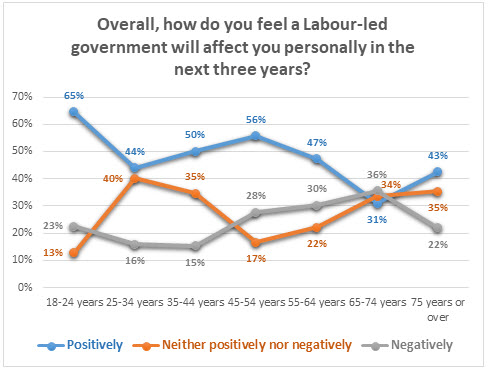 But there is definitely a honeymoon going on. Hopefully this government will manage to ride with it and use it to achieve some of the infrastructure and people wilfully neglected by the past nine years of National wasting time and opportunities for the future. 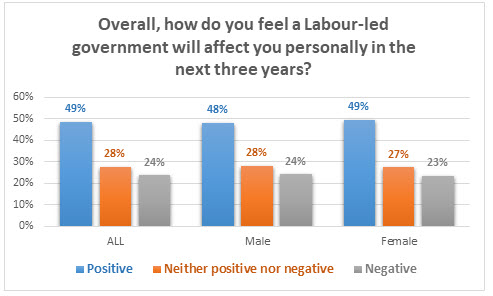 34 comments on “Measuring the honeymoon ”