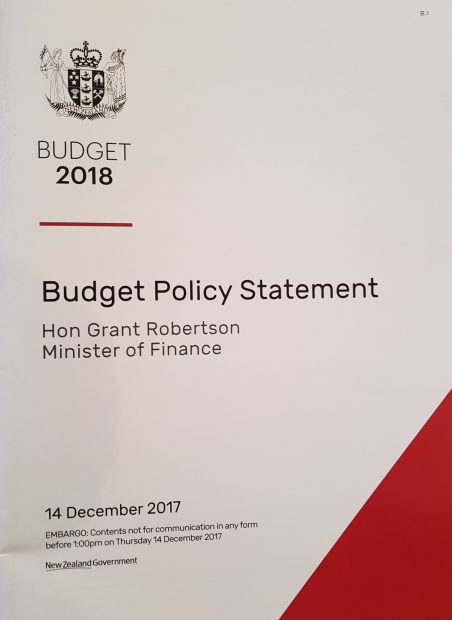 The media response to the Labour-Green-New Zealand First has been remarkably positive.  After nine long years someone is finally taking the scourge of child poverty seriously.

Audrey Young in the Herald was ecstatic.

For a package in which there were really no surprises, the Labour-led Government’s first budget exercise has had a stunning impact.

It was summed up in one headline: Labour’s package expected to halve child poverty.

The prospect of one package nearly halving the number of kids in low-income households (using the standard OECD income measure) when it is fully implemented is the sort of outcome that may assuage resentment of those whose tax cuts have been cancelled to fund it.

It is not that National’s package did nothing. If it had been implemented it was going to immediately lift 55,000 children out of poverty or 34 per cent on the same measure.

As soon as Labour’s package takes effect, in July, it will lift 71,000 children out of poverty, or 44 per cent.

National thought it could offer something to everyone. Labour is targeting families with children.

National is talking up the losers from Labour package of who there are many, wage earners, not all high earners, without children. But politically, there is only one loser and it is not Labour.

Mike Hosking also in the Herald complained that it was a big political risk and not sufficiently targeted.  Presumably Lamborghini drivers should have been targeted.

But even he says that if it works it will be very popular.

Fifteen billion. It is a bucket load of money, and even spread out over several years, you cant hide the fact the Government has thrown pretty much the kitchen sink at their Families policies.

The claims or aims are bold. 88,000 out of poverty – if they can prove that, it’ll lead to tangible political support. But there are a couple of seriously big question marks around all of this.

They’ve spent the lot. There is about $600 million left over for everything else. And $600m in government terms is literally nothing. It can simply vanish if the forecasts are wrong. If the growth slows even the slightest amount, if a budget blows out.

It’s not dissimilar to you having 10 bucks till the end of the week, and you haven’t bought the milk. You might make it, you might not. And the forecasts, which were part of yesterday’s big announcements, were interesting.

Bill English struggled to take the gloss off the economy, simply observing the Government’s got no excuse for not maintaining its strength but saying its approach to sharing the benefits of it was pretty messy.

Yeah but National was itself finally converted on the road to the ballot box this year by also offering a families package which they’re now accusing Labour of stealing.

The Labour plan, also announced before the election, will see 384 thousand families with kids better off by an average of $75 a week while National’s Budget offer in May was lifting the income of 365 thousand families by $39 a week.

So it all comes down to whether the smoko room or the boardroom carries more influence.

And while they’re bickering over the figures, and who’s prepared to be more generous, perhaps the impotent National opposition should reflect on an observation once made by Helen Clark when she declared she was a victim of her own success.

And the ghost of Steven Joyce’s fakenews $11 billion dollar hole in Labour’s figures has finally been laid to rest.

It’s fair to say National was a bit like a fish just landed and gulping for air.

No matter how vigorously it flapped its tail, the water got no closer, and the protest was finally lost.

The worst the former Finance Minister, and more recently party leader Bill English could say about the Government’s opening of the books, taking into account Labour’s big ticket policies, was that they inherited a healthy economy.

The dead cat left on the election table by the man standing alongside him Steven Joyce, in the form of that 11.7 billion dollar hole in Labour’s sums, has finally been forgotten even if the stench does remain.

Robertson’s mini-budget was a chance to re-announce a $1.8 billion package to boost family incomes, through an increase to working for families payments, a $60 a week baby bonus, and rolling out National’s previously announced increase to the accommodation supplement.

There are winners and some losers but this is a package that delivers on Labour’s  promise to halve child poverty.

That will resonate with more than its core supporters.

But the gamble is in the timing.

The package does not come into effect till July 1 – a good month after the May budget.

And thanks to Thursday’s announcements – including the families package, and a resumption of contributions to the Cullen super fund – there won’t be much more than crumbs left to spread some mid-winter cheer.

Meanwhile Steven Joyce can’t quite admit that his $11 billion hole in Labour’s budget is fictitious. From Radio New Zealand:

National’s finance spokesperson Steven Joyce said it was now clear just how incredibly tight it was going to be for the government over the next few years.

“With all the things they’ve promised that aren’t in there, they’ve given themselves very little room and that’s why they are arguing for about $350,000 over Kidscan and all this very small stuff, because it is so incredibly tight for them.

“So I think we’ll see that continue to grow, they’ve got debt going to $70bn over the next three to four years.”

Current net Crown debt is $59 billion. I suspect Joyce picked the $70 billion figure so he can claim there is a $11 billion hole. Someone should tell him the effect on growth and the importance of the debt to GDP ration. In crayon. Slowly. So that we can be confident he understands.

Ad said yesterday that the mini budget would be a big test for the new Government. He was right. I think we can safely say it has passed with flying colours.