Met the Rat, went to a documentary 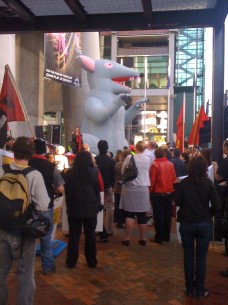 Today has been a busy day. Lyn and Briar have the NZ premiere of their documentary shortly, which limited what I could do today. But I stopped off at the protest outside of the National party conference and met The Rat.

The speakers were right – it does have a strong visual resemblance to John Key.

There looked to be about 400 odd people there when I had to leave just before 11, and more trickling in. Pretty good turnout. I had to shoot off to lug grog around for Lyn for the post-premiere party.

By the time I got back there were police cars all over the place demonstrating bad parking techniques. Apparently the protesters attempted to get into the convention centre where the piggish National supporters were listening to John Key waffling about how he wanted to remove the ability for workers to organise (with a subtext of how he’d like to see wages fall in NZ).

Right now I’m being entertained by young dancers before going in to see the documentary that I’ve been living with for the last few years..

10 comments on “Met the Rat, went to a documentary ”