Miners having a whale of a time 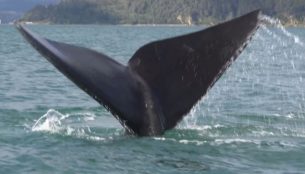 Just as a beacon shines to announce that, perhaps, southern right whales are returning to frolic and feed close-in to coastal New Zealand we learn that a mining exploration company has quietly been given a permit to, among other activities, drill and extract bulk seabed samples from within the West Coast North Island Marine Mammal Sanctuary.

The sanctuary was established specifically to protect the all-but extinct Māui dolphins but is also frequented by blue, humpback, orca, pilot, and southern right whales.  Now, Ironsands Offshore Mining Ltd will be able to drill and extract bulk samples from within the sanctuary. The permit to do so was rubber-stamped by MOBIE’s New Zealand Petroleum and Minerals division. The exploration is allowed to proceed without further official consent because “mineral exploration” is a non-notifiable permitted activity under the Taranaki District Council’s coastal plan rules.

Ironsands Offshore Mining Ltd will need a resource consent to shift from exploring the area to actually mining the seabed, and obtaining that consent won’t necessarily be as easy as filling-in a MOBIE form.

The company is headed by Dr Neil Loftus and is one of a suite of front-of-house companies under the CASS group. It appears to have attracted investors from the United Arab Emirates, Singapore, Malaysia, and Australia. Dr Loftus is taking a below-the-radar approach to the exploration of the marine mammal sanctuary but seemed quite happy to talk up a potential “billion dollar” mine when seeking to prospect the coast off the pristine Waihi Beach.

And we can expect to see more of these exploration permits being handed out by New Zealand Petroleum and Minerals. This week it announced it is now open for applications, on a first come first served basis, for the mineral exploration of  33,006km² in the Otago region and 7,828km² in the Nelson region. Those areas had previously been under a moratorium for three years but, as of Monday, its open slather.

Its was great to feel proud of the fact that the Matariki fireworks were postponed for fear of upsetting a southern right whale which turned up in Wellington Harbour for a great big feed – but gobsmacked now. Greenpeace New Zealand Executive Director Dr. Russel Norman, pretty much, sums it up . . .

The idea that New Zealand would allow seabed mining in a marine mammal sanctuary is absolutely absurd – it beggars belief. As well as being a Māui dolphin habitat, this area is a winter shelter for Southern Right Whales. It’s a terrible irony that the next stop for the beloved ‘Wellington Whale’ could be the new site of a seabed mining operation.

Pressure from over fishing, pollution, and a warming climate means whole ecosystems are threatened. We’re part of nature, not separate from it – ocean life has to be protected, because without it, life on Earth cannot continue. It’s that simple, and it starts with the areas we have already supposedly protected.

59 comments on “Miners having a whale of a time ”