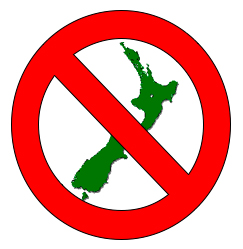 We market ourselves internationally as “100% pure New Zealand”. That’s a powerful claim and a powerful brand, but also a fragile one. A bubble that is easily popped. Stupidly, the actions of the National government seem likely to damage the brand, and with it the tourism industry, beyond repair.

The first damage was caused by National’s ineffectual Emissions Trading Scheme. English newspaper The Guardian, for example, ran stinging coverage of the ETS in an article titled New Zealand was a friend to Middle Earth, but it’s no friend of the earth (which we covered here) . The piece described National’s policy as (among other things) a “commercial greenwash”.

Now the fallout from the prospect of mining in National Parks begins. As reported by The Greens: “One of North America’s most prominent environmental groups, the Sierra Club, has written a letter of complaint to the Prime Minister describing plans to mine in National Parks as â€˜an affront to the international community’ and warning that it could scare off tourists”. The letter states:

While the primary issue is retaining the integrity of New Zealand’s unique wild places, I’m sure you are aware of the attraction these places have for international visitors. … Clearly, any extractive intrusion into the areas that attract international visitors will result in such visitors reconsidering visits to your country if visits your magnificent mountains include vistas that are marred by mining excavations and facilities. On behalf of Sierra Club U.S.A. and Canada as well as the global environmental community, I urge you to remove any National Parks and similar protected areas that meet the standards of IUCN Protected Area Categories I-IV from any consideration for mineral extraction.

According to some estimates, the value of the minerals under our conservation land is about $98 billion. But like flogging of a public asset, it’s a one off boost to income, and it’s not at all clear how much of that potential value would actually remain in and benefit NZ. In contrast tourism is a renewable resource, contributing $18 to $20 billion to the economy each yearâ€”9% of New Zealand’s GDP. Its benefits largely remain in NZ, and it is an important source of employment, with one in ten Kiwis working in the industry. On purely economic grounds it is insanity to put all that at risk for the one-off and unknown income from plundering our National Parks. John Key is the Minister of Tourism. It will surely be his most spectacular failure of all if he manages to trigger the collapse of this vital industry…