I’ve already gone on about the dodginess of John Key’s “faster rising incomes”, but the monetary policy part needs examination too.

Now forgive me if I’m mistaken, but after the 4th Labour Government passed the Reserve Bank Act in 1989, government is no longer responsible for monetary policy.  So John Key wants to take credit for Allan Bollard’s work.  Nice. 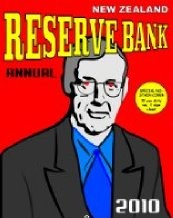 And in fact “strong monetary policy”?  Allan Bollard is letting inflation peak well outside its supposed 1-3% band, “looking through” the GST increase etc, all because the economy is so weak.  His December 2010 Monetary Policy Statement said:

The economy is going backwards, so the Reserve Bank is having to go outside its remit to try and save us from the consequences of a National Government.  Reward: John Key taking credit for your work.  Thanks.

Out of interest the Reserve Bank does see some potential for growth in 2011.  It’s almost entirely from overseas economies picking up – raising commodity prices and giving markets to our exporters.  The only domestic growth driver is rebuilding Canterbury – so unless they want to take credit for the earthquake, they can’t claim to have done anything to help our ailing economy.

Of course what John Key was trying to get at was Labour’s plan to reform monetary policy, trying to stop excess money flows making fortunes for currency traders but sapping our exporters and economy.  He thinks that adding the equivalent of  the Reserve Bank of Australia’s objectives (“stability of the currency; the maintenance of full employment; and the economic prosperity and welfare of Australians”) to controlling inflation would make for too complicated goals.  Presumably the Australians are so much smarter than us and that’s why they can manage it.