National thinks more roads will fix the economy. Problem is: traffic volumes are falling. It’s called Peak Oil. Means they can’t come up with any projects that make sense. Puhoi to Wellsford would cost $1 for every 80 cents of benefit. The next 4 National wants to add to the build list will be even more worthless. Their solution? Weaken the rules.

Here are Joyce’s new criteria for deciding which roading projects will go ahead. 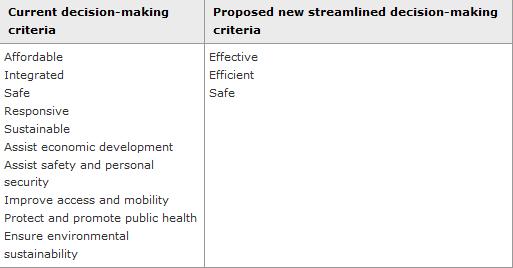 What the hell? If a road isn’t affordable, responsive, sustainable, and doesn’t assist economic development, what’s the point?

The point is: Joyce and National believe in roads. It’s a religious thing. An article of faith. And they believe in building roads that their voters will use and everyone else will subsidise. Having to jump through a bunch of hoops to prove that a roading project isn’t a complete waste of time and money is a pain in the arse.

So, re-elect National and this is your future: paying taxes to subsidise more Holiday Highways so that Tories can get to their bach, sorry, beach house faster. Elect a Labour-Green government and you won’t be subsidising Tories. Puhoi to Wellsford will be canned. And the next generation of RoNS will never get off the drawingboard.