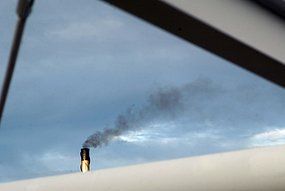 “Today Australia becomes an official member of the Kyoto club after the initial ratification documents were lodged with the United Nations 90 days ago.

And a new poll has found that 64 per cent of Australians support Prime Minister Kevin Rudd’s act to ratify the Kyoto protocol to cut greenhouse gas emissions.

The survey of 1,200 people found 7 per cent opposed, with 29 per cent were still undecided.”

Meanwhile – those hot summer days have not just been your imagination. NIWA says it’s been the hottest summer in almost ten years, with the south of the South Island having the sunniest summer on record.

The Principal Climate Scientist at NIWA Jim Salinger says overall it was a warm and dry summer, with the Waikato experiencing half the normal rainfall (RNZ, 10 Mar 2008).

All this suggests that plans like the Climate Change bill are on the right track. And before you ask – here’s a site that will help you identify some ways of living smarter at home.

Update: For an even more international perspective: Global warming threatens to severely destabilise the planet, rendering a fifth of its population homeless, top officials say