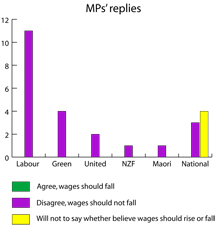 Following revelations that John Key told a business audience “we would love to see wages drop“, I sent an email to all 91 MPs whose emails addresses are listed on their bio page on the Parliament website. The email read:

“John Key is quoted in the Bay Report, 20/12/07, saying “we would love to see wages to drop” Do you agree that wages should drop or do you disagree? Yours Sincerely, Steve Pierson”

Nearly 2 days later, 26 substantive replies have been received, a pretty good return. Thanks to all the MPs who replied, especially United Future all (both) of whom replied, the party leaders (Turia, Dunne, and Fitzsimmons) who replied, and the Greens who had a high ratio of replies and the most thoughtful ones.

And National’s various excuses. As anyone will tell you, a sure sign of a lie is that the excuse varies.