Mr Muddle gets a credibility downgrade

John Key’s economic credibility was shattered by the double downgrade. Now, his personal credibility has been lost after he claimed that Standard & Poor’s said a Labour government would lead to another downgrade. S&P could not have been more blunt: “At no stage have we said that a rating downgrade was more likely if there were a change of Government”.

Desperately backtracking, Key is now saying that it wasn’t his own claim, it was given to him by some anonymous ‘source’ in an email he’s suddenly come up with – he didn’t present it when he made the claim in the House.

Key won’t name the person who sent he claims sent him this fallacious ’email’. In fact, despite S&P’s statement, he seems to be standing by the accusation. The ’email’ is probably just made up; we have no reason to believe it is genuine.

It’s clear to anyone watching the video of his press conference that Key is lying like a snake. It’s those ‘Tranzrail eyes’ again. As Audrey Young says: “He gets that Tranzrail look in his eyes and you just know he is hiding something. ”

Whether there really was an email or not, Key tried to fool Parliament and you and me, his employers, into think that Standard & Poor’s had unequivocally stated that a Labour government would make a downgrade more likely. That wasn’t the case and, whether he really was relying on an email from some anonymous source or not, Key shouldn’t have tried to trick us into thinking it was. 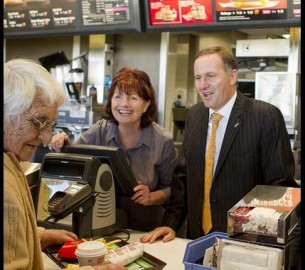 Can I upsize your debt with a double downgrade?

Remember, Treasury has $60 billion of bonds on issue. It will have to borrow another $10 billion or so plus reissue $8 billion in the coming year. Even at only 0.12% extra interest, just those new and reissued bonds will cost $22 million a year.

Thanks, Mr Muddle. Would you mind paying us that $22m on your way out? At least it would be some sign that you’re finally accepting responsibility for the damage you’ve wrought.

Update. Just watching the Youtube that I’ve embedded above where Key reads out the email at the press conference.

Sounds like it’s a real email but Key still misled everyone by claiming that S&P had said something they did not say based on an anonymous email, which made a claim that he did not attempt to confirm with S&P before repeating the claim as fact as if S&P had said it in Parliament.

Man, Key gets hammered by the journos afterwards. He gets a whine in his voice as he tries to defend himself.

Interestingly, the email also says that S&P warned that a downgrade would lead to higher interest rates for all New Zealanders. Seems Key was lying about there being no interest rate hikes too.

Key’s now stuck in the position where he is defending this anonymous email (and his credibility) against the flat out denials from S&P. Just the kind of fight we want the PM to be having during an international financial crisis when the government is borrowing $300m a week.

102 comments on “Mr Muddle gets a credibility downgrade ”