We’re witnessing, once again, the results of a government whose disaster management is focused on keeping blame off itself, rather than acting. It bears remarkable resemblance to their approach to economic management. National didn’t cause the natural and economic disasters it faces but its handling of them has inevitably made them worse.

Take South Canterbury Finance. The Auditor-General has reviewed Treasury’s handling of the company within the retail deposit guarantee scheme and found there were a number of instances when the government could have acted to minimise the cost to the taxpayer. (now well over a billion dollars , despite National’s promise it would be a few hundred million). 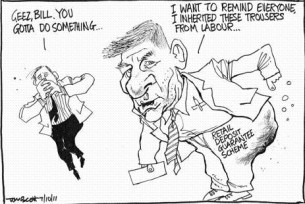 National’s response to this has been to blame Labour for instituting the scheme. In a rather bizarre display last week, Key responded to every question about his government’s handling of SCF by citing an article written by John Armstrong ab0ut how clever Labour had been in rushing through the retail deposit scheme before the last election. He missed (or refused to acknowledge) the point that, for all the schemes faults, it did give the government the power to act to minimise the taxpayer’s risk and stop people taking advantage of the guarantee. (it’s worth noting that this incidence along with the throat-slitting, the S&P lies, and the 5 day no-show in Tauranga are part of a wider context of Key losing the plot politically since the downgrade)

The AMI bailout is tracing a remarkably similar path to SCF. This is a government that doesn’t learn its lessons. As with SCF, AMI has breached its bailout agreement. That gives the Crown the right to suspend the agreement or to take over AMI. Instead, it has done nothing. Inevitably, that will mean higher costs when the thing does go under.

Finally, there’s the deficit of $18.4 billion announced yesterday, as government net debt surged through $40 billion (up from $2 billion when National took office). Yes, about half of the deficit is due to the earthquakes. But what about the other half?

Most of it’s due to economic underperformance and the cost of additional debt (the government now spends $1.5 billion a year more on benefits and $1 billion more a year on interest costs than when National came to power). And National, of course, will argue that isn’t their fault.

The problems keep piling up, and this government is running out of other people to point the finger at.

But some of it is undeniably their fault. The tax cuts that National passed last year cost $2.7 billion in the last financial year. Now, these were meant to be ‘fiscally neutral’ thanks to an offsetting increase in GST. But additional revenue from the GST hike was only $1.6 billion. The $1.1 billion short fall had to be borrowed.

The government is undeniably borrowing for tax cuts which flow overwhelmingly to the most well-off (and Bill English is now trying to quietly drop his ‘fiscally neutral’ promise).