Something that really boiled my blood a few weeks back, but which I haven’t had a chance to write about yet was this post by National Party pollster David Farrar on the topic of a recent lull in homicides in a single police district. It was the worst kind of politics – a person who knows his argument is false taking advantage of the suffering of people and the ignorance of his audience for petty party political points scoring.

Noting that there had been just one homicide in Manukau this past half year compared to 50 (actually, 48) in the previous two years David wrote: “So homicides have gone from one a fortnight to one in six months. Must be a coincidence with the extra police resources, right?”

Almost certainly yes, it is a coincidence.

As David and anyone with a smattering of statistical knowledge understands, when you have very rare events occurring at random intervals you get clumps of events and periods of none – it doesn’t necessarily mean anything, it’s usually just statistical clustering. The fact is that homicides are very, very rare events – about 1 every 5 days in a population of 4.3 million means (assuming everyone has an equal chance of being a victim) that it would take 26,000 years – four times recorded history! – before the odds of you being a homicide victim would pass 50%.

We can’t credit the Government for the fewer homicides in Manukau in the last half year any more we can blame for the tripling of homicides in Tauranga. Or for the three homicides in the past week in Manukau. Throw darts at a dartboard blindfolded and you’ll get clumps of darts and areas with no darts – it’s not a meaningful pattern – it’s coincidence.

Nationwide, homicides totaled 30 over the last six months, a little below the average of 35 for the previous 30 six month periods but, again, not enough to be statistically meaningful. A welcome drop in the number of homicides over a short period in one area proves nothing and anyone with thinks about it knows that. As Rex Widerstrom commented on David’s post “I sometimes wonder how DPF can sell his services as a statistician at the same time he uses his blog [for this statistical gibberish]”.

Where is a evidence for a causative link between the extra police in Manukau and the fewer homicides in those few months? There isn’t any. Just as National’s cuts to police numbers in other areas haven’t unleashed a wave of murders. 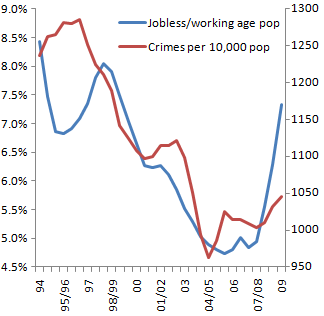 If David really cared about reducing crime, rather than dishonest political point scoring on people’s suffering, he would join us in calling for the government to get serious about job creation – that is the single most effective tool the government has to make our communities safer.