David Small has been a activist for social justice for a long time. Notably in the 1981 tour and getting raided by the SIS in 1996. He is currently a Senior Lecturer in Education at the University of Canterbury, in the US on Fulbright scholarship, and Barrister and Solicitor of the High Court of New Zealand. He offers his views on the Mana party effects on left politics in NZ.

Where to now for progressive electoral politics in Aotearoa?

When Hone Harawira parted ways with the compromised remnants of the Māori Party, some left-leaning activists, political figures and commentators were quick to seize on the possibility of building a political party around him that would advance the interests of Māori as well as the broader left. I was skeptical. I believed that while Hone’s agenda (that is the kaupapa on which the Māori Party was originally formed) overlapped with that of the broader left, it was not the same. I hoped that Hone would aim to forge ahead with a progressive Māori party that would win the Māori seats and eventually become the natural electoral vehicle of Māori.

I also had a number of concerns about the Māori/left mix that was being touted. For one, it seemed as though it was really serving as a shortcut to get a left-wing party up and running without doing the hard yards of building it from the bottom up. Hone’s seat would give the party a parliamentary presence which might be convenient in the short-term but could ultimately make it unsustainable. The experience of the Alliance showed both the benefits and the pitfalls of parties being dependent on the electorate seat of a single individual.

Bomber Bradbury (who defriended me over this) and others kept quoting electoral arithmetic that “proved” that the Māori/left party idea would produce the numbers to oust National. I always doubted the possibility and even the desirability of a government with Goff as PM. But I was more concerned at the medium/long-term impact such a party might have on the rest of the electoral landscape and in particular on the Greens.

The Greens are the only “third party” that has survived for the life of MMP without ever having the luxury of an electorate seat. And they have done so whilst undergoing a total change in leadership. I think their model of dual leadership and the historical accident of not having an electorate seat have contributed to their sustainability. (Labour may have done them a favour by refusing to cut them an inch of slack in the Coromandel all those years ago.) Also, notwithstanding the criticism leveled at the Greens for refusing to rule out a deal with National this year, they remain one of the most progressive Green parties in the world. My worry about the proposed Māori/left party was that it if it had a reasonable showing in November, it could have attracted enough votes from the Greens to pull them under the 5% threshold. I was also concerned that if too many progressive Green members and activists jumped ship to Mana, the Greens could drift to the right. 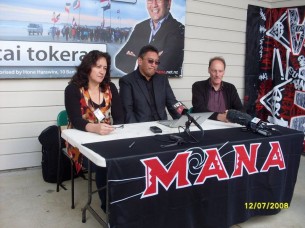 As it happens, I doubt that Mana took more than a few hundred votes off the Greens. Mana performed quite well in the Māori seats, with Hone holding Te Tai Tokerau, Annette Sykes coming a strong second in Waiariki and Angeline Greensill pushing the Māori Party into third place in Hauraki-Waikato. But the leading Pakeha candidates failed miserably.

Just 402 people or 1.7% of the voters backed John Minto in Manukau East. This was only 22 more than the Conservative Party candidate and half the support of the NZ First candidate. Sue Bradford did even worse in Waitakere coming sixth out of seven candidates with less than 1% support. The Conservative Party candidate got twice as many votes as Sue and even the legalise cannabis guy beat her. I have the greatest respect for John and Sue but, at three and four respectively on the Mana list, it would have been bizarre for them to have been carried into parliament with anything like that level of electorate support.

I think Mana’s future lies in the direction I always hoped Hone would take; building a strong progressive Māori party that can win and hold the Māori seats. And I think the non-Māori left who are interested in electoral politics can lend Mana some support but need to look elsewhere for our own political parties. Help to maintain the Greens as a progressive force. Use the opportunities presented by the rout of Labour to keep it true to its principles. Or start building a new left vehicle that might tap into the sort of inspiration that spawned the Occupy phenomenon and engage the disenfranchised into thinking and acting politically.