Here was Agriculture Minister David Carter on Q+A yesterday on whether National would bring agriculture into the Emissions Trading Scheme:

CARTER  We’ve signalled that we’re doing it in 2015. We’ve signalled we’ll do a review prior to that to make sure that there are feasible technologies available for farmers to manage to bring agricultural gases into an emissions trading scheme, and you’ve got the Labour Party campaigning on bringing it in in 2013, with or without solutions.

GUYON         Well, isn’t that fair enough? Why should the rest of us subsidise the farmers? Cos someone has to pay, and at the moment we’re subsidising the farmers. Why is that fair?

MR CARTER  Because New Zealand relies on agriculture for our very survival, so what we need to do is work hard, both here in New Zealand with science and internationally to find solutions.

GUYON         Aren’t you asking a lot, though, Minister? Because you’re saying that farming and farmers are such a big part of the economy, therefore we have to accept that we pay higher prices for milk and cheese at home – oh, and also we have to subsidise them when it comes to the emissions trading scheme. I mean, isn’t there a point where other New Zealanders are going to say, “Well, come on, you should pay your fair share”?

MR CARTER  Yes, they should, and that’s when there are solutions available. So at the moment, as Andrew Ferrier just mentioned, Fonterra, through its processing, is under the emissions trading scheme. Every farmer purchasing energy, purchasing fuel is in an emissions trading scheme. What you’re talking about is making the farmer pay for methane and nitrous oxide emissions. Now, let science find some solutions, and when those solutions are available so that we can still carry on producing agricultural products to export to the world, then is the time to make the farmers pay.

Despite saying ‘yes, we are planning to bring agriculture in’, it’s clear that National is setting up a line of ‘we want to bring them in but there’s no way for them to reduce emissions, so it’s not fair to charge them’. Carter repeatedly states that there’s no scientific solutions to reducing farm emissions. But it’s just not true. Indeed, agriculture is already reducing its emissions, especially when you look at the comparison between economic output and greenhouse pollution. (sources: MFE and Stats) 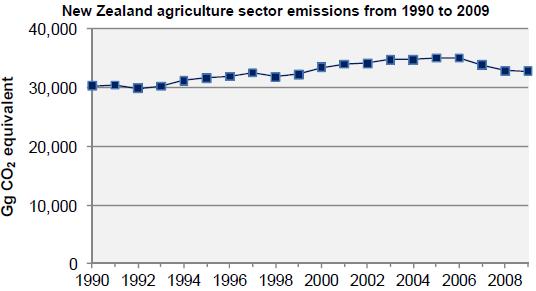 So, there you have it. Agriculture already can reduce its emissions while increasing economic output. An ETS will further incentivise that, and mean the rest of us aren’t subsidising farmers as much.

If National doesn’t want to make farmers partially pay their own way, it needs a more credible excuse.