National’s “housing policy” – the centerpiece of their weekend conference – is a dog. 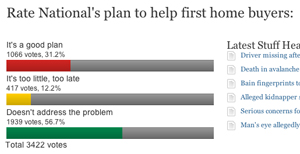 All it does is reverse their previous cuts and tinker with the limits on loans in a way which only benefits a few — as Eddie described it yesterday “by giving cash to people previously considered too well-off for the subsidy”. And that at the “sting in the tail” cost of a much higher deposit requirement.

The (unscientific) Stuff poll to the right suggests that we the public are not impressed.

“National’s announcement today is a cynical attempt to look as if it cares about the housing affordability crisis before the next election rolls around,” Green Party Co-leader Dr Russel Norman said today. …

“John Key wants to give the impression he is facing up to the housing affordability crisis but is not brave enough to implement measures that would actually address the fundamental drivers of the housing bubble,” Dr Norman said.

Mr Dunne, a Government ally and Revenue Minister until June this year, says he doesn’t support the plan to make it easier for first home buyers to use their KiwiSaver funds for a deposit.

“KiwiSaver was established to boost New Zealanders’ retirement savings, given our notoriously bade track record in that regard,” he said on Monday.

“Weakening it by extending it to home ownership detracts from its original aim and establishes a precedent for adding other items it can be used for.”

The best that any friendly analysis could come up with was this:

“I think it really is a marginal development, it is important for those who are just on the edge of entering the market, and it will assist them.

“[But if] it constitutes a big enough group to actually have a big enough impact in the market is questionable,” he said.

Changes to schemes aimed at helping Kiwis buy their first home won’t do anything to solve the affordability crisis, according to property experts.

The Government yesterday unveiled changes to the Welcome Home and Kiwisaver schemes it said would help more Kiwis get onto the property ladder.

Notably absent however were any policies aimed at halting the seemingly inexorable rise in property prices – in fact, by increasing demand at the lower end, there are fears the changes could actually push prices higher.

Labour and The Greens are clearly setting the agenda with a strong focus on housing affordability. National are struggling to catch up. But they are going to have to do a lot better than this.