National brings its B game to social media 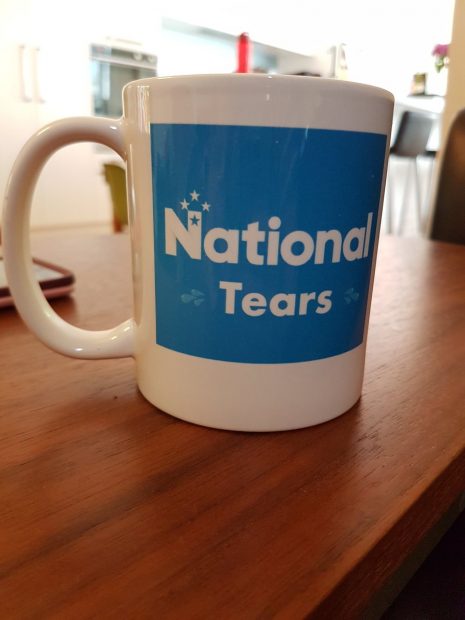 For a party that used to be the feared promulgators of dirty politics and whose proxies attacked and smeared critics and opponents mercilessly National’s latest efforts generated a huge feeling of Meh.

Exhibit one is the brand new website LetsUndoThis.   It is owned by the National Party and is basically a collection of themes it hopes its supporters will post through social media.  They should talk to the Russians because the things they raise are pretty lame.  The claims are also pretty dubious at best and I am sure that a thorough analysis will show they are wrong.

Like its claim about National Standards.  It says this:

Parents have a right to know how their kids are tracking at school. And how they measure up against their peers around New Zealand.

National Standards was about ensuring there was accountability in the Education system, not only to the Government, but the parents who pay for it and want the best for their kids.

How can you address educational issues, and target investment where it is most needed, if you don’t measure progress?

Labour are quite happy to insist on nationwide measuring standards on the environment, but not when it comes to the future of our kids.

Note to National.  Testing of kids and collection of data will continue.  Parents will still be able to find out how their kids are doing at school.  Teachers will have more time to teach, rather than testing continuously.  And your subtext, that teachers were previously somehow not accountable, is a load of bogus nonsense.

Exhibit 2 is some latest twitter activity from the former queen of twitter, the crusher of cars, and the leaker of information to the formerly feared Whaleoil commonly who was known as tipline.  For she has been sucked in by a twitter meme account.  And refused to admit this when it was pointed out to her.

LabourMemes is a humourous anonymously run twitter account that is not, repeat is not, an official Labour twitter account.  But such is Collins’s confusion she thought it was.  Clearly in Crusher’s world attack accounts are always sanctioned and run by the parent party but for her information the left is full of humourous independent souls who often do things of their own volition.

National MP Judith Collins has taken aim at a political meme page on Twitter in what may be a case of mistaken identity.

Ms Collin criticised the “Let’s Meme This” Twitter account, a satirical page not affiliated with the Labour Party, but known for making jokes at the expense of rival parties.

She was offended by a joke where the page compared National MP Matt Doocey to a potato.

“So this is the gentle, kinder, more caring @nzlabour under @Jacinda Ardern,” she tweeted. 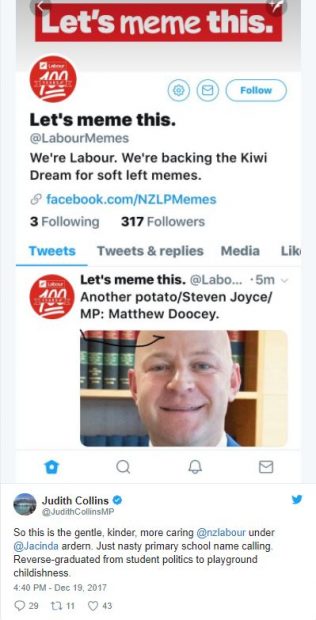 1) We are a meme page (google it).
2) You haven't denied that he is a potato.
3) When will you roll Bill? Would make great meme content.
Ta.

Also also: who is @jacinda? We know she’s god, but even she has a last name on twitter. Maybe @jacindaardern can teach you how to internet?

Okay let’s settle this: Matt Doocey is a potato

And others have chipped in:

Judith Collins, who has said Cam Slater is one of NZ's best journalists, is upset about someone being called a potato. ok.

Gosh @NZNationalParty based their whole campaign on name calling and smearing lies all over the place. Come on Aunty Judith, you're better than that!!

National’s social media game is a pale imitation of what it used to be.

52 comments on “National brings its B game to social media ”