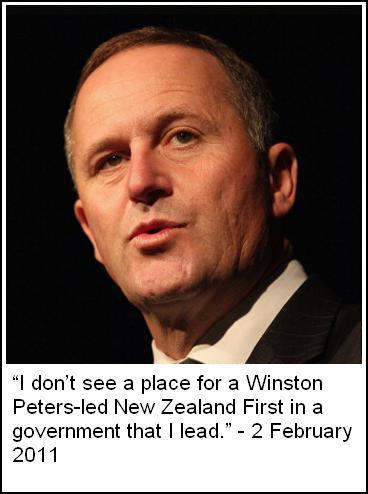 How times have changed.

In 2008 and in 2011 Key adopted what some thought was a position of principle and ruled out National going into coalition with NZ First, specifically Winston Peters.  But it seems that National’s dwindling prospects at this year’s election have made it err on the side of expediency over purported principle.

Prime Minister John Key has announced a big shift in National’s position heading into the next election by refusing to rule out a coalition deal with NZ First.

It is the first time Key has even contemplated going into government with NZ First leader Winston Peters after consistently ruling him out as a coalition ally since 2008.

As a further sign of how desperate the Government is Peter Dunne has been returned to Cabinet and Chris Tremain has been sent to the knacker’s yard in advance of his exit from Parliament.

Key today announced the reshuffle of his Cabinet, returning Dunne as a minister and dumping Chris Tremain.

Dunne resigned as a minister last year after an inquiry into the leaking of a sensitive report could not rule him out as the source.

Key also confirmed his preference for the Conservatives.

Given the right electoral circumstances, he would prefer to continue working with the Government’s three current partners – ACT, the Maori Party and UnitedFuture, he said.

“I believe there is also a scenario where it would be possible to add the Conservative Party to this group,” Key said.

The Greens and Mana will be pleased that Key has ruled out working with them.

For National to succeed we could see a multi headed National-Act-Maori Party-United Future-Conservative-NZ First government.

How stable would that be?